The theme of this year’s National Pro-Life Conference was “Transforming our Culture” and was sponsored by LifeCanada and hosted by Alliance for Life Ontario. It was attended by nearly 300 people.

This was the first national conference the WeNeedaLAW.ca campaign participated in. Throughout the three-day event there were innumerable references to the amount of youth joining the pro-life movement. I’m 36 years old and don’t consider myself young, but as those of you who have been attending these type of events for years can attest to, the grey hairs have certainly formed the majority…until now. 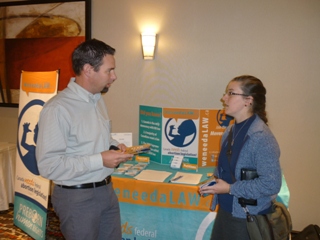 As LifeCanada President, Monica Roddis referenced in her opening remarks, the pro-life movement has experienced a resurgence this past year due to the Canadian Centre for Bio-Ethical Reform’s “New Abortion Caravan” and also the launch of the WeNeedaLAW.ca campaign to restrict abortion to the greatest extent possible.

When you convince people that something works, and specifically young people, they get excited about the possibilities. No longer is there a reminiscing about how things used to be, or even a lamenting of where things are at presently. Rather, when victory is imminent, people get energized.

There are opportunities that exist for the political arm of the pro-life movement to take steps now to protect pre-born children who currently have no protection. Most Canadians want restrictions on abortion, and as Margaret Somerville said in her presentation, “if we have any hope of changing the status quo we have to support gestational legislation.” The energy that is fueling the movement is due to a refreshingly new strategy that places our message in a new paradigm; one that has realistic steps we can take to end the killing.

Conferences are great for networking as well as inspiring one another. Now that the successful 2012 National Pro-Life Conference is over it’s time to get to work. The participants need to get busy in their separate capacities. For some it’s education, for others it’s eleventh-hour ministry. For this campaign it means continuing to grow the groundswell of support among all Canadians for legislation that restricts abortion to the greatest extent possible. We’re going to fulfill that mission by working with the general public, media and parliamentarians.

We don’t do this work so we can enjoy each other’s company at cocktail parties and banquets that go along with conferences. That won’t transform the culture. We do it to because we love our neighbour no matter their location, and want to do all we can to save babies.