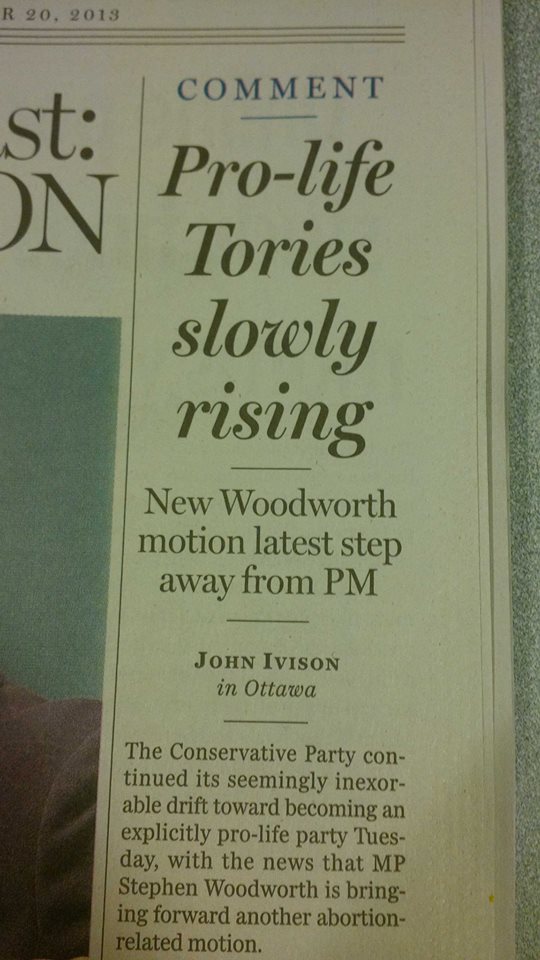 Canadians can thank Member of Parliament, Stephen Woodworth for his courage and tenacity as he continues to address Canada’s unjust laws which fail to recognize all human beings as human.

SEND AN EMAIL TO YOUR MP AND MR. WOODWORTH BY

In today’s National Post John Ivison comments about Mr. Woodworth’s new motion that focuses on “legal recognition of the equal worth and dignity of every human being.” In addition to his objective remarks about this development, Mr. Ivison also acknowledges a distinct change in Canada’s pro-life movement. He writes,

“The pro-life campaign is happy to proceed at a languid pace – it is a long game aimed at persuading Canadians that the abortion debate is not settled and demands a legislative response.”

Canada stands alone among all democratic nations in how we afford protection to children prior to birth – we don’t. While there may not be many Canadians who support a ban on abortion, most of us are not comfortable with the status quo.

We may not agree with Mr. Ivison’s characterization of our campaign as “languid”, but he is entirely accurate in his observation that pro-lifers are willing to take many steps in our efforts to correct the injustice of abortion. Historically, it was a perfect law, protecting pre-born children at all stages, which a majority of pro-lifers would only have supported. Thankfully, this increasingly youthful movement now understands that changes in public policy only occur after a significant shift in public opinion. It is clear that a shift is happening, especially in regards to sex-selective and late-term abortion.

The time has come to translate Canadians’ views on protecting the child at some point before birth into policy reflective of those views. Mr. Ivison gets it. Let’s hope Parliament does soon too.