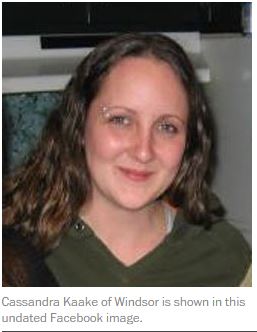 The brutal murder of a Windsor, Ontario woman who was 30 weeks pregnant has resulted in renewed calls for Canada’s lawmakers to pass a pre-born victims of crime bill. Cassandra Kaake and her pre-born daughter Molly were murdered last December. Last week Windsor police arrested Matthew Brush but he was only charged with one count of murder.

Canada’s lack of any recognition of a child before birth will not allow police to prosecute for Molly’s death.

Windsor police Sgt. Matthew D’Asti said that regardless of their own opinions, investigators must work within the confines of the Criminal Code of Canada. It does not recognize an unborn child as a person and a victim separate from the mother in violent crimes.

Windsor resident Kim Badour has launched a petition on change.org in an effort to build support for the re-introduction of Bill C-484. She believes that #MollyMatters and so do we! Please head over to the petition and sign your name to it!

In addition, please send this email to your MP asking him/her to advance pre-born victims of crime legislation.