Well this is interesting. In spite of refusing to budge on a proclamation which bans pro-lifers from the Liberal Party of Canada, the federal New Democrats think Justin Trudeau is not pro-choice enough. 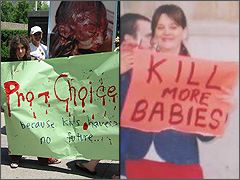 The federal Liberal leader has endorsed the P.E.I. Liberals in the upcoming provincial election and was campaigning with P.E.I. Liberal leader Wade MacLauchlan this week in Summerside when he came under attack from the federal NDP. The reason it seems is because Mr. MacLauchlan has indicated that if elected he would continue to support the status quo. Currently abortions are not provided on the island and women travel off the island to have their pre-born child killed.

“He claims his party ‘defends rights,’ yet fails to do so. Will Mr. Trudeau stand by his convictions and tell Wade MacLauchlan that women’s right to choose is non-negotiable, or does he support this anti-choice Liberal policy? Canadians deserve better.”

It is a pretty sad indictment on the status of our culture if in the game of politics the lusting after power is carried out by seeing who can be most supportive of the legal killing of human beings.