Every year in May, pro-life Canadians gather for the March for Life, the longest-running annual march in Canadian history. Across Canada thousands of people march, and up to 15,000 have converged on Ottawa’s Parliament Hill for the largest annual march in the country. 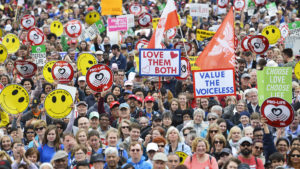 This year marks 50 years since Prime Minister Pierre Trudeau first legalized abortion in Canada. From there, remaining restrictions were removed in 1988. Ten years later, in 1998, Campaign Life Coalition organized the first March for Life on Parliament Hill. Now, many cities join every year with local events on the same day, adding their voices to the cry to protect unborn children.

This year, Toronto will host its first-ever March for Life, giving an opportunity for those in the GTA to add their voices to the national call for human rights for all human beings.  The Toronto March for Life will feature workshops following the march, giving attendees the opportunity to equip themselves for confident everyday activism. These workshops aim to get people plugged in to active pro-life organizations in their own cities, and to equip them for conversations with friends, family, and colleagues.

More than 20 years since it began, the March has grown significantly, and the pro-life movement has grown significantly – but protections for pre-born children have not followed. The government seems not to care about numbers or consistency, and each year we march against a backdrop of the only western nation still with no restrictions on abortion.

We do not march to put on a show, or to boast in our events. We march because 100,000 children are lost to abortion annually in Canada. We march because we understand the deep injustice of abortion, the lack of respect for the right to life, the disregard felt for humanity. Our hearts ache for these lost children, and for our lost country.

We do not march to make sure the government hears us; we march because it is the right thing to do. Rather than worry about who is hearing the message, and how loudly, we worry about who is not hearing it, and how to keep the message going beyond this single day of activism. We use the March to be encouraged by our fellow pro-lifers and to spur each other on to action that lasts all year, not just for one day.

Canadians need to know the status quo, and they also need to know why it is unacceptable. This is a message best carried locally, and personally. This year Toronto’s March for Life will give thousands more people the opportunity to be a voice for the voiceless. Maybe more cities will join next year, and the year after that. Maybe one day every city in Canada will host a March for Life, attended by those who make life a priority all year long.

Maybe then the government and pro-choice Canadians will hear and answer, and maybe they won’t. Either way, we will still march, and then we will go home to live every day in a way that honours life.