When we launched the SignsUp! campaign earlier this year, we really had no idea what to expect. We were blown away by the number of people signing up to stand on street corners in their community, being a daily witness to commuters that Canada has no abortion law.

Now, the SignsUp! campaign continues in your hands!

Want to do SignsUp! with your school club? Maybe you want to use the signs to send a message to your provincial legislature. Or maybe you and your friends want to educate commuters at a busy intersection near you.

The signs are available for use and, similar to our flag display, we will work with you to coordinate dates and location, and assist you as much as possible in sharing this message in your community. You can arrange to get signs and find out more here.

The first round of SignsUp! action got noticed. The week of the March for Life saw some of the most pro-life media coverage we have ever seen, and part of this was due to the fact that communities across Canada were confronted with the reality that Canada has no abortion law, and saw that people are willing to stand up and protest that injustice.

A quick look at how it went down:

Here are links to some of the media coverage generated by SignsUp!:

Does Canada need laws for abortion?

Letter to the Editor: Canada needs a law to govern abortion

Letter to the Editor: Thirty Groups March for Life

And a huge congratulations to these little volunteers who posed for what was selected as the winning picture from the campaign! Abortion is a hard thing to talk to kids about, but when you do, they instinctively get everything that’s wrong with it. This makes them passionate about sharing the message, and we hope that their childlike understanding of right and wrong when it comes to abortion will stay with them into all the gray areas of adulthood. 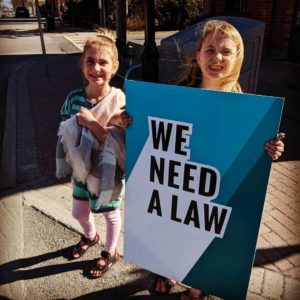 Of course, thank you to all of YOU who made this possible. Without cross country support, this campaign would not have been nearly as effective. We are honoured that so many of you would take time out of your day and week to stand up with us for those who cannot speak for themselves.