On August 23, Erin O’Toole was elected as the new leader of the Conservative party. While O’Toole has made it clear that he does not intend to introduce abortion legislation, his victory gives a lot of room for the pro-life movement to work thanks to his commitment not to squash debate among his party members. 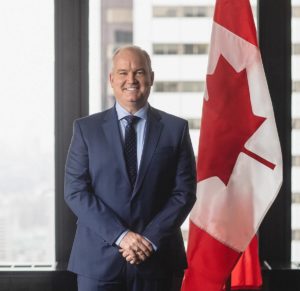 During the leadership campaign, Mr. O’Toole said that freedom for MPs on conscience issues is a fundamental part of the Conservative party. We encourage you to send a short note of congratulations to Mr. O’Toole and include a reminder of his responsibility to protect the human rights of all human beings. His email is [email protected]

The success of Dr. Leslyn Lewis and Derek Sloan shows that Mr. O’Toole needs to ensure that the Conservative Party makes room for and respects the pro-lifers that assisted in getting him elected as leader. Those who voted for Lewis and Sloan were very influential in getting Mr. O’Toole the support needed to win on the third ballot.

During the leadership race, Dr. Leslyn Lewis modeled how politicians should be speaking about pro-life policy. She put forward four policies that are all in line with both Conservative party policy and with popular opinion: banning the misogynistic practice of sex-selective abortion, protecting women from coerced abortions, increasing support for pregnancy care centres, and ending funding for international abortions.

Mr. O’Toole would do well to learn from Dr. Lewis’ clear policy proposals that obviously resonated with Conservatives and have the ability to unite Canadians. He has an immediate opportunity to do so with Bill C-233, the Sex Selective Abortion Act, a private member’s bill introduced by his colleague Cathay Wagantall. With no legal framework around abortion, Canada is silently condoning the practice of aborting girls solely because they are girls. This is something we should be ashamed of, and not something that Mr. O’Toole can continue to ignore.

We look forward to working with Members of Parliament and grassroots supporters to ensure legislation that advances pre-born human rights is introduced and debated at the earliest opportunity.

It is time for Canada to get in line with our international counterparts by regulating abortion and protecting pre-born human rights. We are the only country in the world with no restrictions on abortion, and that needs to change. We look forward to seeing how Erin O’Toole participates in this ongoing debate.