No results were found.
An error occurred while attempting to retrieve data. Please try again.
Please select the option to share your location in order to use the Detect My Location feature.
We were unable to detect your location. Please enter your postal code instead.
Postal code and geolocation data may not always be accurate. Please check to ensure that the electoral districts displayed below are correct. 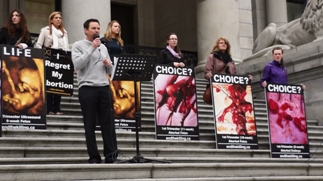 Vancouver, BC – May 29, 2012 – Today the reality of abortion was made visible to thousands of people in downtown Vancouver. Canada has no abortion law and over 100,000 children are dying every year. It’s time that Canadians who aren’t convinced that this is a grave injustice, saw with their own eyes what is being chosen when a child is aborted.

Trucks plastered with images of aborted pre-born children drove through the downtown core of Vancouver and young women and men held large signs of aborted fetuses with a single phrase attached – “Choice?”

WeNeedaLAW.ca director, Mike Schouten joined other speakers at the launch of the New Abortion Caravan in calling for something to be done about the status quo concerning abortion in Canada. “It’s a travesty that abortions happen in Canada though all 9 months of pregnancy”, Schouten said to the throng that had assembled in front of the Vancouver Art Gallery. “Canada needs a federal abortion law”, he shouted to the cheers of many.

The afternoon began with a rousing rendition of ‘O Canada’ led by avid pro-lifer and father of 9, Mark Donnelly. For those unaware, Mr. Donnelly capably leads the singing of the National Anthem prior to Vancouver Canucks hockey games.

Some radical pro-abortionists interrupted the speakers at various times with their tired and worn out slogans of “my body, my choice” and other more vulgar sayings that don’t bear repeating. Their empty rhetoric did nothing to dampen the spirits of the women, men and children who immediately following the speeches took to the streets with the graphic reality of abortion.

“It was a pleasure to share the podium with such enthusiastic and dynamic speakers at the start of this monumental effort to expose an egregious human rights violation against this country’s most vulnerable citizens”, concluded Schouten.

The Beginning of the End

Canadian Auto Workers on wrong side of abortion debate

Join us in building support for these initiatives: