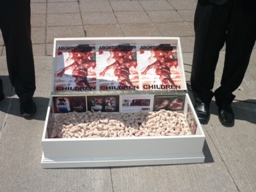 On Saturday, June 30th a group of young Canadian pro-life women and men gathered in Ottawa for an epic event.

The New Abortion Caravan, a project of the Canadian Centre for Bio-Ethical Reform (CCBR), which began its cross country tour on May 29th in Vancouver had reached its destination of Ottawa. The purpose of ending the journey in Ottawa on the Canada Day weekend had huge significance. Abortion is not a women’s rights issue, but rather the greatest human rights violation facing our country.

The capital city is the very place where the men and women work who have the ability to end the status quo on abortion, and the duty and calling to protect the lives of all Canadians, no matter how small they are, or where they live.

“Abortion has ended the lives of over three million pre-born children in Canada since 1969. Their silent screams cannot be heard, but their broken bodies can be seen. We are here to show Canada’s elected officials the faces of Canada’s invisible children,” said Stephanie Gray, the Executive Director of CCBR before we had a moment of silence and sang the National Anthem.

Please take a few moments to watch the video of this event. The images are powereful and the message is clear. With God’s blessing in 18 years we will look upon this day as the beginning of the end of the killing in Canada.