Around the country Canadians are taking part in an massive effort to bring awareness to Canada’s lack of abortion laws and the plight of 100,000 pre-born girls and boys each year.

One of the most prominent and effective manners of getting this message out is by way of roadside ‘abortion memorials’. It’s been nearly five years since a group in Southern Alberta constructed a large memorial consisting of hay bales and crosses on the front lawn of a local church and since that initiative many other groups have followed suit with numerous variations. 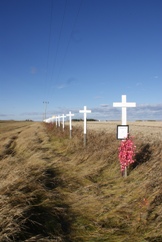 Roadside memorials are commonplace alongside many roads in Canada and they serve as respectful reminders of people who once were alive, and are now gone. So also abortion memorials remind passersby of lives that once were and are now gone. These highly visible displays are effective because they help to visualize the tragedy of abortion and somberly reflect on the message behind the many white crosses.

Near the town of Devon, Alberta (south-west of Edmonton) a group has put up a different style of memorial. It consists of large white crosses attached to the tops of fence posts and runs for several kilometers down the road.

This memorial has been up for the past number of weeks and has been received well by the surrounding community.

It also has provided an opportunity for someone to grieve the loss of their pre-born baby.

Baby X lived in secret and was killed in secret. In a most touching and moving manner, Baby X’s parent crafted a beautiful display, accompanied by an emotional poem and placed it beneath one of the crosses using the memorial to mourn an offspring that was “killed in secret”. 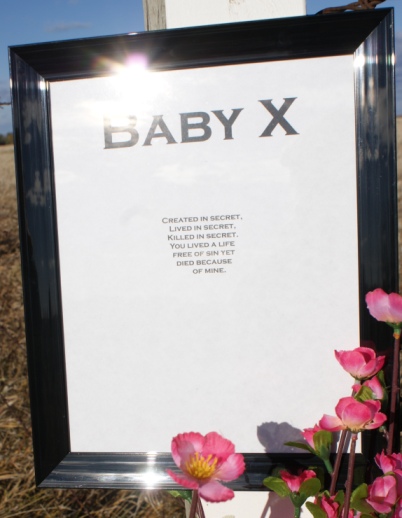 Abortion hurts everyone. It leaves no one untouched. It impacts men and women physically, emotionally, and spiritually.

There is healing. There is forgiveness. For anyone affected by the loss of a child through abortion please click here. People are waiting to help you by offering compassion and guidance through the reconciliation process.