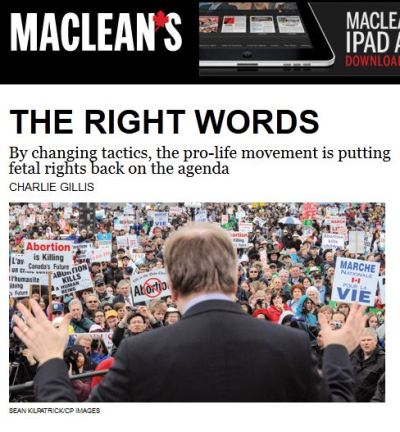 The November 19th edition of Maclean’s magazine has published a feature article on the growth and renewed momentum in Canada’s pro-life movement. The piece, written by Charlie Gillis is titled, “The Right Words“. It takes an objective look at recent attempts to place fetal rights back on the agenda of public discourse.

The author attributes the change in strategy, endorsed by WeNeedaLAW.ca and many other groups, as a major contributing factor to the renewed excitement in the pro-life movement.

Here’s a few paragraphs from the article:

“Why, then, is it [fetal rights] back on the public agenda?…In part because the law abhors a vacuum.

Just as important, though, has been a renewed sense of mission within Canada’s battle-scarred pro-life movement, which has modified both its message and strategy to more closely reflect mainstream values. A pivotal moment came last May, when representatives from the Association for Reformed Political Action, a national Christian advocacy group, approached Vancouver-based activist Mike Schouten about running an initiative to build support for fetal protection legislation.

Schouten, 36, is a former Christian Heritage Party candidate with a history of backing hardline conservative causes (including limits on Muslim immigration). He also has a knack for teasing rational arguments out of emotional issues. The result was WeNeedaLaw.ca, an online campaign using social media and electronic petitions to paint Canada’s lack of an abortion law as an international anomaly—an embarrassment not by the standards of social conservatives, but of liberal democracies like Sweden and France.

It is not like anti-abortion initiatives that have gone before. WeNeedaLaw eschews churchy slogans, stakeouts at clinics and demands for an all-out ban on abortions. It speaks instead of “human rights” for fetuses and urges the passage of any law that would offer protection to the unborn—such as restrictions on late-term abortions. Schouten admits that this acceptance of part-measures doesn’t sit well with some of his fellow travellers. “I’ve called on a lot of pro-lifers to rethink their positions,” he says. But it does square with Canadian public sentiment. In an Ipsos Reid poll last July, fully 60 per cent of respondents—including 62 per cent of women—said they would support a law limiting access to abortion during the last trimester. The thousands of signatures WeNeedaLaw sent off to MPs played no small role in getting Woodworth’s motion onto the Commons floor.

The result of Mr. Gillis’ interviews with Eugene Meehan of the legal profession, Mike Schouten and Lisa Smith from the pro-life movement, and Liberal Member of Parliament, John McKay is a profound article which calls into question the legal vacuum that exists surrounding pre-born human rights.

To read it in its entirety, please click here.