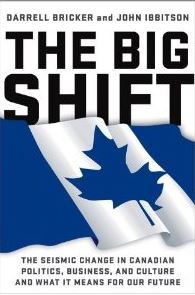 “The Big Shift” by John Ibbitson and Darrell Bricker is receiving national attention from both sides of the political spectrum. I guess that when ideas such as those put forward in this book are devoured by those inclined toward politics we shouldn’t be surprised. In fact, it’s fascinating when a country experiences pendulum swings within a generation and we can observe a cultural transformation right before our very eyes.

There is another shift underway in Canada at the present time, one that may not be as big as Ibbitson and Bricker point out in their new book, and certainly not associated with the Conservative party. But it is happening. It has to do with pre-born human rights. Human rights are always forefront on the minds of Canadians, but this concern hasn’t always applied to pre-born humans. This shift has nothing to do with partisan politics and is certainly not a right versus left  dialogue. This is good because human rights transcend those barriers and concern all of us.

This answer is causing a greater level of discomfort and angst among some Canadians, especially in light of the current reality that our country does not recognize the rights of preborn children at any stage of development.

In reality, we have been discussing the status of the child in the womb for decades in Canada, except that, for the most part, the discussion has been dominated by those who wish to only address women’s rights and their freedom to choose. This is most unfortunate. I would submit that all Canadians support choice, the freedom to choose whom to marry, where to live, who their medical provider is, etc.  But what Canadians don’t support is the unjustifiable killing of another human being. As a society we can see that the abortion debate is shifting and now has as its rightful focus, the preborn child.

The shift we are witnessing is very similar to one that America witnessed prior to the passage of the Civil Rights Act in 1964. At that time there were those who attempted to frame the debate as an economic one, emphasizing the negative impact that the recognition of people of colour would have on commerce and trade. As this veneer broke down, and blacks were seen as fully human, their freedom became more and more a reality.

Currently in Canada there are still those who cling to an ideology that ignores what science and philosophy have to say about the humanity of children in the womb. As the shift continues, it is greatly enhanced by Canada’s youth. As shown by a recent poll commissioned by Life Canada, nearly 80% of Canadians aged 18-29 support preborn human rights in the last trimester. We are witnessing a youth movement unwilling to blindly accept the dogma of the previous generation and who are making decisions informed by science and reason. In addition they are displaying a heart for responding to injustices, manifested by the sheer numbers of young Canadian women and men involved in the battle for the protection of all human beings, no matter their location.

Just as Ibbitson and Bricker write how the “Laurentian elites” no longer own the country, pro-choice advocates no longer own the language surrounding the rights of pre-born children. For that, Canadians can be thankful.