Last week Friday my wife and I were expecting guests for dinner so, while I was out running a few errands, I stopped at the local liquor store to pick up a bottle of wine. Working for a non-profit organization teaches you to be frugal so rather than step into the private liquor store, I headed into the government operated one where prices are a little lower.

As I walked down the aisle to where my favourite wine is displayed I noticed a captivating poster adorning the shelving. This is pretty standard; the government does know something about marketing. It has also done a decent job in using their marketing to ensure that the public knows the risks involved with drinking too much. 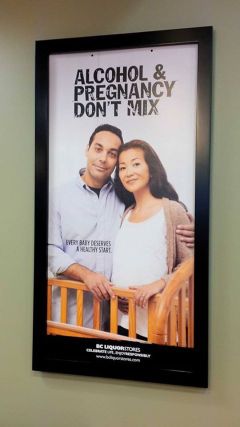 This time however, the many posters caused me to take a second look. The caption exclaimed, “ALCOHOL & PREGNANCY DON’T MIX” and below it stood a happy, expectant couple behind an empty child’s crib. But what really caught my attention was the phrase in smaller font: “Every baby deserves a healthy start.”

As it is my full-time job to advocate for the very children these posters were drawing attention to, I paused to think for a moment. Something didn’t jive here. On the one hand we are concerned about the health of a developing child in the womb, and on the other we allow them to be aborted for reasons as flippant as inopportune timing.

I asked a couple of the clerks if I could take a photo of one of the larger posters. They gave their permission, albeit with questioning looks. When I informed them of the dilemma these posters caused in my mind, they understood instantly.

Later that day I went to the BC Liquor store website in order to find out how many stores are in the province. I found the same ad there and so I can only assume they are appearing in the 195 liquor stores the province operates. The provincial government in BC is quite possibly investing hundreds of thousands of dollars to ensure that ‘every baby has a healthy start’. Meanwhile, the federal government is transferring millions of dollars to the very same province to ensure that abortion terminates one in four pre-born babies. For 25% of BC babies, their “healthy start” comes to a very quick and violent end.

This alcohol and pregnancy awareness campaign, when juxtaposed against Canada’s lack of any legal protection for children in the womb, makes absolutely no sense whatsoever! Canada’s position of being the only Western nation without an abortion law (meaning women can request and receive an abortion at any time during a pregnancy) is untenable and totally inconsistent with our country’s high standard for human rights.

Prior to seeing the plethora of ads in a BC Liquor store, a pregnant woman may have been unaware of the serious complications that drinking while pregnant could bring on her pre-born child. I would submit that society also needs to know the harm abortion brings upon pre-born children. When that happens, society will rise up and demand that we do something about it. We can do better.