The remarks this week from Richard Dawkins give us a window into what extent eugenics has become part of Western society again. 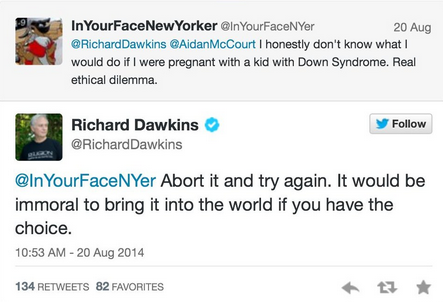 It is only a short one hundred years ago that eugenicists in Britain and the United States began putting their ideas into practice. As they strove to create a perfect society, the weak, blind and disabled were sterilized and institutionalized to prevent them from pro-creating. These ideas soon proved fatal as the Nazis took eugenics to the next level by killing their own disabled citizens as a means of preventing weak genes from entering the human race.

When the horrors of the Holocaust became public in the 1940s, eugenics faded to the background. But once again we are witnessing science being manipulated in an attempt to create a more “perfect” society.

New developments in prenatal monitoring certainly can be seen as positive. But Canadians ought not deceive themselves. This technology is being used as a tool for eugenics, in an attempt to “improve” society by eliminating less-than-perfect pre-born children.

“Richard Dawkins is advocating something that people are already doing. But we’re not supposed to be talking about it.”

Events over the past one hundred years have shown us what happens when taking the life of another human being is justified under the guise of eugenics. If Canada is going to give human rights more than lip service, we can tolerate modern-day eugenics no longer.

Tagged: abortion,Dawkins,Down syndrome,eugenics,pro-life, Thoughts or Feedback? We’d love to hear from you!