A common concern from those in the pro-choice and what I call the “soft” pro-life movement surrounds the public messaging about abortion in a way that may reach children.

While valid arguments can be made on both sides of the debate about the use of graphic images depicting aborted children, this article focuses on non-graphic visuals, and words. This could be a sign on the side of the road or a display of crosses in a local farmer’s field. It could even be a window decal on the vehicle in front of you, which, interestingly enough, recently raised the ire of someone who took the time to message us as to the inappropriateness of exposing the truth of abortion to “young readers”.

If a picture is worth a thousand words, it’s going to take a lot of words for us to convey the horror of abortion adequately to our children.

Or is it? We drove past a display of crosses shortly after I began working in the pro-life movement, before we had talked much with our young children about what “pro-life” even meant. 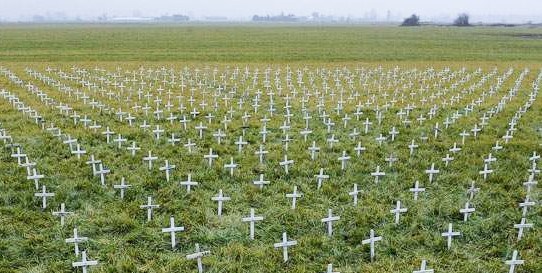 “What are all those crosses for?”

I suppose I could have made up anything, but if our children can’t count on us for truthful information, who will they count on? So I said, “Those are to remember babies who were made but then never born because their parents didn’t want them.”

“What do you mean they weren’t born?”

Silence from the back seat of the van.

Tentatively, “Why? Why would a mom want to kill her own baby?”

And then, “Can you still decide you don’t want a baby anymore? Like if you didn’t want Theo anymore, would you bring him to a doctor and he would be killed?”

But as I stated last week, children understand abortion very easily, and very well. They understand that it is essentially a story of disposable children, and that understandably horrifies them. Talking about abortion with our children is a wake-up call to stop lying to ourselves. I had worked quietly in the pro-life movement for months before I had this conversation with my children. It took only 10 minutes in the car with the music turned down to make me understand the issue more than any book, article, or legal history ever could.

Tagged: abortion,Canada,events,God,unborn children, Thoughts or Feedback? We’d love to hear from you!