Arguably, from the perspective of a pro-lifer, the United States has a heavy judge-imposed framework against which pro-life laws need to labour, as opposed to a more simple legal reality which exists in Canada.

When the Supreme Court in the U.S. legalized abortion in Roe v. Wade (1973) they extended a woman’s privacy rights under the Due Process Clause of the 14th Amendment to her decision to have an abortion. This legal reality changed somewhat in Planned Parenthood v. Casey (1992) when the court affirmed that a woman has a right to abortion, but only until fetal viability.

In Canada women have no such right. Certainly, abortion was decriminalized in Canada when our Supreme Court ruled in the R. v. Morgentaler decision (1988), but the judges did not give women a “constitutional right” to abortion.

Yet, in the 43 years since Roe v. Wade pro-lifers in the U.S. have advanced many protections for pre-born children, while in Canada we are closing in on three decades of failure to enact any such legislation. In the past six years alone the US has passed more than 300 pro-life laws!

The Casey decision opened the door to state legislation that regulated the procedure and also protected pre-born children in the latter stages of pregnancy. According to National Right to Life, the oldest and largest pro-life organization in the U.S., 14 states have what are called “Pain-Capable Unborn Child Protection” laws in place. Such laws protect from abortion pre-born children who are capable of feeling pain. Medical evidence demonstrates with certainty that pre-born children are capable of experiencing pain by 20 weeks after fertilization; these laws ban abortion after 20 weeks gestation. 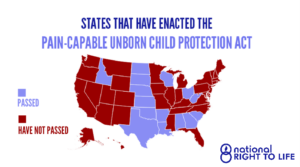 Why has Canada not passed fetal pain legislation? In a 2014 letter to The Guardian, Gerard Mitchell, former provincial court judge (1975-77), P.E.I. Supreme Court Justice (1981-1987) and Chief Justice from 1987 until 2008 wrote the following about the Morgentaler decision: “None of the seven judges held that there was a constitutional right to abortion on demand. All of the judges acknowledged the state has a legitimate interest in protecting the unborn. Even Madam Justice Wilson, who rendered the most liberal opinion in favour of a right to abortion, advocated an approach to abortion that would balance that right with the state’s interest in protecting the unborn.” [Emphasis added]

The answer to the question, “Why has Canada not passed fetal pain legislation” (or any legislation that regulates abortion) is not because the science isn’t on our side. And it’s certainly not because our highest court has given Canadian women a right to abortion. Rather, a significant reason why the status quo remains is because of the inertia and fear of politicians to support such legislation in the face of a virtually unchallenged liberal media.

Fetal pain legislation similar to what we’ve seen passed in the U.S. would ban abortion after twenty weeks gestation. While statistics on abortion are difficult to ascertain in Canada, the Abortion Rights Coalition of Canada estimates there were 104,158 abortions in 2014. According to the Canadian Institute for Health Information, approximately 2.4% of abortions are procured after 20 weeks gestation. Based on these estimates, we can safely say that 2,500 abortions occur post-twenty weeks gestation every year in Canada. But the reality is we don’t really know.

Fetal pain legislation would not only save lives, it is supported by a majority of Canadians. You don’t need to call yourself pro-life to understand that inflicting pain on a human being is unjust.

In other pages of this issue of Reflections Magazine you will read about the substantive medical evidence that pre-born children experience pain by twenty weeks gestation.

The status quo can be improved on and fetal pain legislation can become a reality in Canada.

The role of the state is to pass laws that restrict evil. Fetal pain legislation could limit the evil of abortion and save the lives of pre-born children. Fetal pain legislation would also raise the cultural awareness of the human rights of the pre-born child. It would put abortion restrictions back into the Criminal Code, thereby sending the message that something is wrong with abortion.

Progressive improvement is better than deferred protection.
_______________________________
This article was written by Mike Schouten, the director for WeNeedaLAW.ca, a public awareness campaign that mobilizes Canadians for the purpose of passing laws that protect pre-born children. It first appeared in Life Canada’s Reflections Magazine and is reprinted here with permission.