January 28th marks the 30th anniversary of the Morgentaler ruling, which eliminated abortion restrictions from our Criminal Code. The Prime Minister at the time, Brian Mulroney, made two attempts at passing legislation that protected fetal interests and, for a variety of reasons (among them, all-or-nothing pro-lifers), both failed to pass. Since then, governments of all stripes have avoided discussing abortion legislation. Justin Trudeau is doing his best to change that.

Whether intentional or not, the changes the Liberals have made to the Canada Summer Jobs program have evoked a national conversation about abortion that we haven’t seen in decades. A common theme in all the backlash – from a surprising variety of places – against Trudeau and the Liberals is that Canadians do not support opinion-policing by the government, whether or not they agree with the opinion being policed.

The criticism has especially focused on Prime Minister Justin Trudeau’s dogged determination to reference “reproductive rights” as an actual Charter right.  Doing so indicates either a serious lack of knowledge regarding the contents of the Canadian Charter of Rights and Freedoms, or a serious lack of concern for what it contains.

Is abortion a “right”?

The rights laid out in the Charter are those of life, liberty, and security of the person. No matter how many times the Liberals attach “and access to abortion”, it does not make it true. On January 28, 1988, the Supreme Court issued a landmark ruling that removed all abortion restrictions from the law. They deemed Canada’s existing abortion regulations as unconstitutional in that it unnecessarily impeded and delayed access to abortion, so infringing on a woman’s right to liberty and security of the person. What this ruling did NOT do, however, was declare a constitutional “right” to abortion. In fact, it turned responsibility over to Parliament to make a new law.

As stated so succinctly by the National Post: “Fact check: What permits unrestricted abortion in Canada is not a law, but the absence of one. There is an important difference. The Supreme Court struck down what it ruled were overly restrictive laws in 1988, and gave Parliament a year to come up with replacements. Parliament tried, failed, and gave up, apparently forever.” 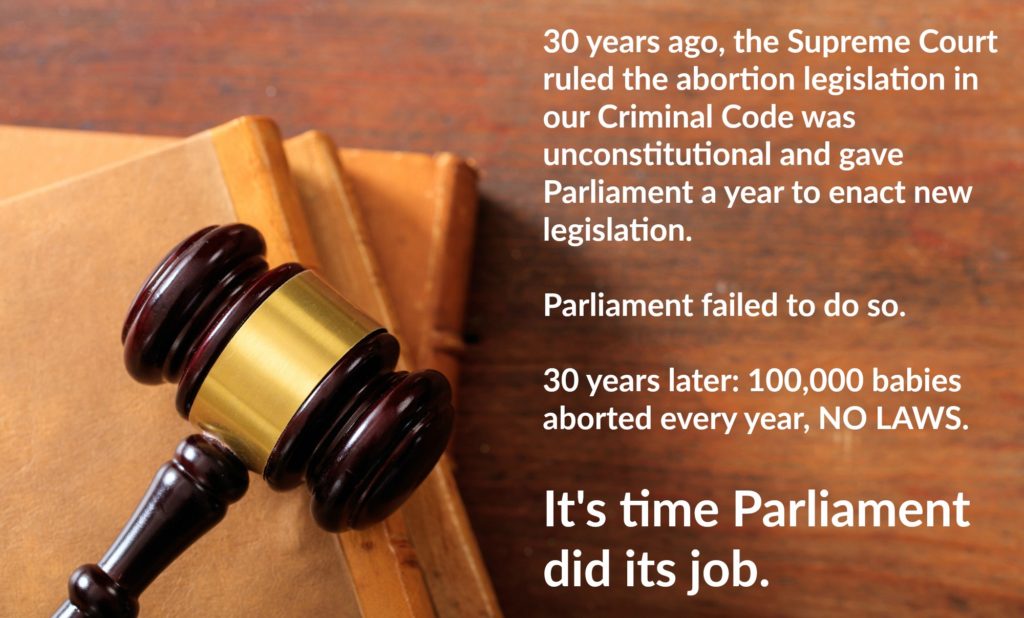 We saw this situation recently with the debate around medically assisted dying, or euthanasia. The laws were struck down and Parliament was given a set amount of time to create new ones, or a free-for-all would ensue. This time they buckled down and did their duty before euthanasia, like abortion, was left in the hands of the medical community to decide.

Some argue that the guidelines implemented by the medical community do, in fact, suffice with regards to abortion. However, just as there are many excellent reasons not to let doctors decide when their patients should die, so there are many reasons not to let abortion doctors decide when abortion is allowable. What other industry allows the stakeholders to make the decisions regarding the legality of their dealings?

The majority of Canadians are unaware that abortion is legal throughout all 9 months of pregnancy, and when informed of the status quo show support for bans on things such as sex-selective abortion or third-trimester abortion, with 77% saying they think abortion should be illegal in the last 3 months. The Canadian Medical Association sets viability outside the womb at 20 weeks gestation, and prenatal surgeries are growing, showing clearly the humanity of children in the same stages of development as some of those being aborted.

Pregnancy, planned or unplanned, can certainly be inconvenient, disruptive and fraught with stress. Undoubtedly a discussion on abortion at the national political level will also be inconvenient and disruptive, and fraught with stress. That doesn’t take away from the reality that pregnancy involves a real human child who should have his or her human rights protected. Canadians are willing to have hard conversations.

Thirty years ago the Supreme Court left it up to Parliament to decide how abortion ought to be regulated. Canadians can be encouraged to know that the national conversation launched by the Conservatives under Brian Mulroney is being continued today by Prime Minister Trudeau and the Liberals. It’s time to see that conversation move into the House of Commons again with the introduction of a bill that offers a reasonable response to the Morgentaler decision.