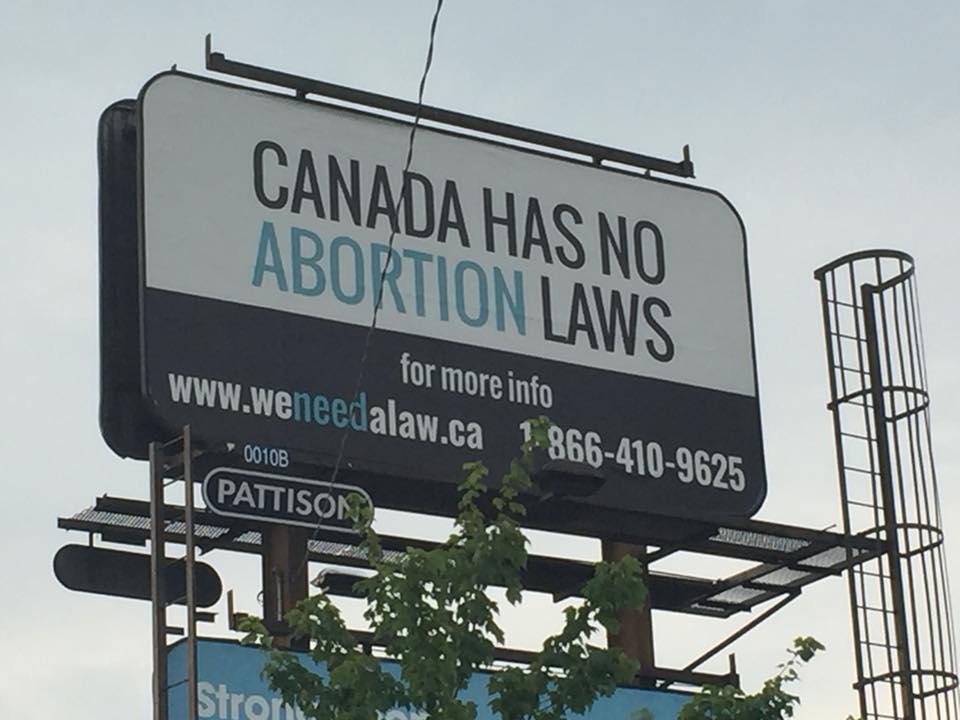 This summer we are running a national billboard campaign that has garnered a lot of attention, both positive and negative. Funded by our grassroots supporters, the goal of our simple billboard message is to take the abortion debate back to the basics. Polls show that the vast majority of Canadians are unaware that Canada has no abortion law. In fact, most are quite convinced there IS a law. With a name like “We Need a Law” this obviously makes discussions pretty challenging for our organization so, first things first, we need to set the record straight.

Abortion has been legal in Canada since 1969. In 1988, all remaining restrictions were struck from the Criminal Code. The Supreme Court justices made it very clear that they were striking an unconstitutionally obstructive law in the assumption that Parliament would craft a new one.

Parliament did not, and so Canada is the only democracy in the world to have no law regarding abortion. We even have a section in the Criminal Code stating that a child gains the rights of a person “when it has completely proceeded, in a living state, from the body of its mother.” This means that the status quo on abortion extends far beyond the crisis pregnancy situation most people picture when they think of abortion. This means that when a pregnant woman is murdered, her child is not considered a victim, no matter how far along she was in her pregnancy. It means parents who find out they’re expecting a girl when they’d rather have a boy, can (and do) request and receive an abortion.

This is the status quo in Canada.

Abortion rights advocates are calling for the removal of the billboard ads and recruiting people to complain. A lawyer called the ad “misleading” while at the same time admitting that Canada has no abortion laws. This is a message abortion activists have been using for years, but they are upset to hear us say the same thing, and clearly flummoxed on how to debunk their own claim. Joyce Arthur, spokesperson for the Abortion Rights Coalition of Canada, has taken many opportunities to tout the fact that Canada has no abortion law, and their website declares this clearly. And yet, she describes the ad with words like, “demeaning, discriminatory and degrading.”

What is demeaning is to think women, or anyone, want anything less than the truth.

The reaction to our simple billboard tells us a lot about where the abortion debate stands, and affirms the need for this return to the basics. What we really want is for people to get past the polarizing rhetoric and think.  Think of the last pregnancy you witnessed, whether it was your own, your friend’s, your partner’s, your neighbour, your employee, your sister, your daughter, or the cashier at your grocery store. At what point was that child worthy of protection? Would the mother agree with your perspective? What is it about wantedness that gives value to a human life? What about the women who grew up in poverty and abuse and keep hearing the message that they would have been better off aborted?

This debate gets personal fast, as evidenced by some of the shocking, ugly messages sent our way over the past weeks in response to these billboards. But if this ad is unacceptable, what ad on abortion would be acceptable? We should be able to challenge opinions and question the status quo without hateful backlash and fearful censorship. How will we grow, debate, change, and develop in an environment that shuts down controversial debate? We can all drive past billboards selling us burgers, trucks, and vacations, but not a billboard that challenges us?

We are better than that.

This ad takes it back to the basics. It doesn’t offer solutions, it doesn’t address the myriad social structural failures we need to address. It simply asks people to think about whether they are ok with this status quo. If they are not, we’d love to join with them in starting somewhere, for women and pre-born children, because human rights should apply to all human beings.