Thank you to supporter Trish Smith for sharing her heart in this letter, and allowing us to share this letter with you. As she asks, take some time to consider why you think the way you do…

I am a mother of three. All three of my children are different; all three of my children have had very different journeys. I feel compelled to write this letter, maybe because I need to find meaning in why my baby had to struggle so much in the first portion of her life. Maybe we can use her story for the better of all babies. I am always interested in why people think what they think. I am a Christian, so the Bible is the lens that I wear to look at the world. My religion shapes the way I think, the way I feel, and who I am.

Why do you think abortion is wrong? Or why do you think it would be ok, even good, for you to choose abortion or support those who do? What has happened in our thinking that has made many, many people ok with killing unborn babies? 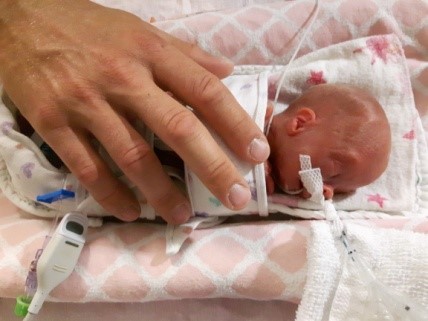 Yet she was completely whole: tiny ears, 10 fingers, 10 toes and a tiny cute nose. It took the doctors less than one minute to deliver her, less than one minute from the time I was put out to the time that they cut her out of me. So, in Canadian law, that means it took less than 60 seconds for her change from a fetus into a real baby, a person with rights.

But I am a Christian, so I believe that she was a valuable, intended life the moment she was conceived. What about you? Why do you or don’t you believe she or any other baby during the fetal stage has value, or rights?

This is our beautiful, happy girl nine months later. 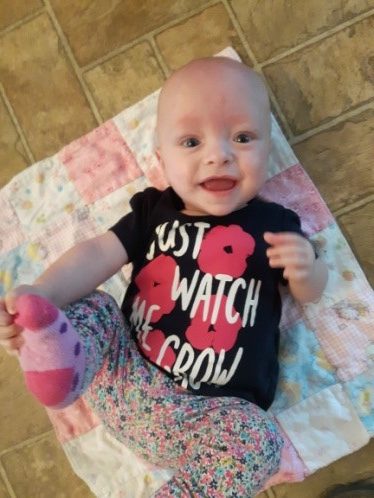 She is nine months old, but we say ‘corrected to six months’.  The excellent doctor at her most recent specialist appointment said something that really struck me. He said, “It depends on your religious beliefs as to when life begins, but development begins at conception, so we have to compare your baby to her conception date and due date age, not her actual birth date.”

It depends on my religious beliefs as to when life begins?! Did he just say that religion determines science? So belief, or religion, determines when a fetus becomes a valuable life? Development begins at conception, that is a scientific fact, but apparently it is the lens through which you look at the world that determines whether this development qualifies as “life” or not.

You know, there was a time in history when you were considered a complete idiot if you let your religion determine science. During the Middle Ages, the majority of the world was Christian and therefore they looked at the world and made their decisions through the lens of the Bible. Then in the 1700s we had the Age of Enlightenment, and developed a higher estimation of man and science. People started to believe more what science said, and less what was written in the Bible. For example, many Christians were, and are, considered idiots for not believing in the “science” of evolution over a Creator God making the earth in 6 days.

Yet, in our post-modern, post-truth world, I was now told our beliefs can trump science, when it comes to the beginning of life. It is up to us to decide when and why life has value.  There is no reason or logic to this.

Where do you fall in your thinking? Is opinion your truth, allowing disregard for basic scientific fact? Do you throw aside the science of a developing human, so a beating heart is not relevant to life? When did opinion start to matter more than fact, and who gets to decide the facts that support your opinions?

Maybe you can be a person who thinks about your own thinking, and so together we can understand what motivates our thinking and decide if it is as it should be.