This article is a guest post from a woman who attended the 2018 Abortion Beyond Bounds conference and shared her thoughts and experience with us. We respect her wish to remain anonymous, and are thankful for her willingness to share from the front lines of the “other side.” 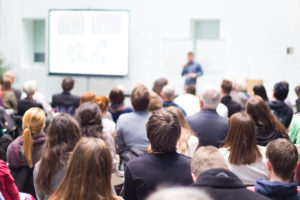 On Oct. 11, 2018, I went to Montreal to attend the Abortion Beyond Bounds conference, a pro-choice conference celebrating the decriminalization of abortion. During the conference I felt like an outsider, a pro-life woman surrounded by women actively fighting to make abortion more accessible.

The conference began with a discussion on misoprostol and mifepristone, medication that fulfills two main goals of abortion advocates: making abortion accessible for people far away from abortion clinics, and “demedicalizing” abortion so that doctor appointments can be avoided except for emergencies. In a way, this showed that pro-choice people don’t really care about the well-being of women. They think that giving a woman the ability to completely manage her own abortion is empowering and, since women “know their bodies,” we should trust them to know when to go to the doctor instead of having mandatory follow-up appointments. This is actually dangerous for women, as it places a heavy emotional burden on those seeking abortions and minimizes their physical health, as abortion is a medical procedure with its own health hazards and concerns.

I noticed that the pro-choice side doesn’t really view abortion through the perspective of the individual. For instance, they aren’t bothered by the fact that some women will face negative and harmful side effects, as long as the majority of women experience safe abortions. They don’t care that some women face severe emotional trauma after going through an abortion, as long as enough women are satisfied. They don’t care that some women regret their abortion, as long as they’re not vocal about it. They censor women’s experiences to make abortion look like the best solution, when nothing could be further from the truth.

I quickly realized that the fight for abortion rights is about women who want the right to choose when a pregnancy is convenient for them. Most justifications for abortion were trivial, such as “I already had one daughter and I wanted to focus on her,” which show what little regard they have for life in the womb. Throughout the whole conference, abortion was emphasized as “self-care”. Speakers said that abortion saves lives, even while acknowledging that every abortion ends a life. They were vocal about thinking their own lives hold more value than those of their pre-born children.

Another thing I found interesting was that, although abortion in Canada is legal through all 40 weeks of pregnancy, the pro-choice side does not feel like they have “won.” They won’t feel that way until all pro-life thought is extinguished, and abortion is available any time, and anywhere. They mentioned that the lack of laws against abortion right now benefit doctors who want to perform abortions, instead of benefiting women across Canada. While many roadblocks stand on the pro-life side of the issue, they as well see many challenges. For instance, while we see a doctor advising a patient to have an abortion as an invasion of human rights, they see a doctor refusing to perform an abortion as a major setback, denying a woman her rights. Where we see the removal of a pro-life club at a university as an attempt to censor pro-life views, they might be unhappy because the club was removed for “not having enough members” instead of their preferred judgment that they were “misleading people”. The presenters at the conference also spoke against Crisis Pregnancy Centers for trying to show pregnant women options besides abortion, and wanted all such centers to be shut down by the government.

The pro-abortion side thinks of the “anti-choice” movement as callous towards women in tough situations, only caring about the baby when it’s inside the womb. This is a bold lie, no matter what the pro-abortion movement claims. It is the pro-abortion side that does not support women in the way they claim. Abortion is a “quick-fix” that does not solve any underlying issues. If a woman is in poverty and can’t afford a child, having an abortion will not remove her from her situation. In the case of rape, the abortion does not change what happened. These larger issues are not addressed, and the women who have abortions are left to deal with shame, grief, and emotional trauma. Instead of seeing women have abortions because of the shame around being a single mother, why not strive to remove the stigma around single mothers? If abortion is a sign that some women are too poor to raise their children, shouldn’t both sides of the issue be saddened to see high numbers of abortion? As feminists, shouldn’t they still be fighting against sex-selective abortion, or abortions that are pushed upon women by partners, abusers, or family?

Instead of “empowering” women to have an abortion, we should be empowering women to be strong mothers who raise their children in love despite any hardships they may face.

My final reflection on the conference is that, while it was an uncomfortable experience, it was important because I saw firsthand the need to continue the fight against abortion. Attending this conference allowed me to better understand the passion and reasoning that drives people to promote abortion, and made me all the more certain that the pro-life movement is on the right side of truth and love.

The pro-choice movement is right in being unwilling to say they have won. Pro-life thought is far from dead in Canada. For the sake of children, women, and families everywhere, pro-life thought must be held onto, promoted, and explained so more and more lives can be saved, and women empowered to make a choice everyone can live with.