Parental consent for abortion is not mandatory for minors in Canada. Teen girls can have an abortion performed without notifying anyone, and they are then left alone to deal with the physical and emotional consequences.  One common argument is that no one should be able to consent, or withhold consent, on someone else’s behalf. Whether the woman in question is 33 or 13, the “her body, her choice” rhetoric is alive and well.

It is important to consider what this argument says in relation to minors. “Her choice” may sound supportive, but is it really? Should a young teen want to be left to make such a choice alone? If she fully realized the long term impact of this choice, would she choose to carry such a secret, choose to have no one to turn to for support? Is her choice really a choice if she felt there was only one option? 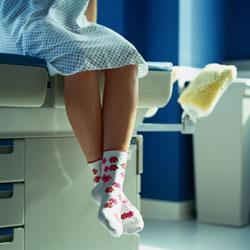 We all want what is in a minor’s best interests. Yet some argue a parent or guardian should not be involved when their daughter has an unplanned pregnancy. Why is it, at a time when a young teen has to make an irreversible decision, we think that anyone but the parents should be deciding what is in her best interests?  Who, if not parents or guardians, can genuinely protect the best interests of our children?  Doctors? Governments or courts? The teens themselves?

Doctors are well educated in the physical realities of abortion. In this way, they are well-positioned to inform girls about the procedure, as well as other options. They are not, however, in a position to offer counselling and emotional support to anxious girls, nor should we ask them to be. The reality is, for a teen in a vulnerable position, doctors can be intimidating and their opinions overwhelming.

Perhaps the government could objectively determine the benefits of an abortion for a particular individual.  Even in the unlikely event that they could, this would take away a long-recognized legal right to parental authority. Parents would be deemed secondary authorities, while the government usurped their responsibility.  If this was acceptable when deciding who should have an abortion, why not in deciding who should be allowed to have kids at all? Why not in deciding where your children should be educated? State control over the nation’s children can never be the answer.

Finally, and perhaps most importantly, what about the teen herself? Many teens are as mature emotionally as they are physically. Should these young women not have a voice? Indeed, they should. However, their voice should not be the only one they hear. Science is clear that the teenage brain is still developing, particularly the pre-frontal cortex, the area of the brain which allows for future planning and decision-making. The adult brain has a deeper capacity for this kind of thought, making adults a better choice than peers when grappling with such an impactful decision as abortion.

In addition, adults can offer resources. These resources are not only financial, but also include resources such as a driver’s license and vehicle to get to doctor appointments, time they are willing to give to babysit a child that could be born, support they are willing to give to their new grandchild, and access to follow-up care post-abortion or post-partum. A parental consent law in Canada would recognize the value of adult support and involvement in a teen’s pregnancy, as well as recognizing parental authority and responsibility.

Parents and guardians, then, are really the only option when it comes to consent for minors to have an abortion, just as parents are the ones who need to consent to a teen getting a tattoo, using a tanning salon, or even going on a field trip from school.

What about parents who are incapable of making good decisions, you ask, or whose relationship with their children is strained, or worse, abusive? This is a legitimate concern when requiring parental consent. But does that mean we should strip all parents of their rights for the sake of those few who may be inept? Certainly not. What it means is that we build safeguards into the law, where teens have the option of bypassing parental consent with good reason. In these cases, be it of abuse, incest, or fear of reprisal, we can allow doctors, government, or courts to step in and assist an adolescent in making a good medical decision.  Parental consent should be the standard to which exceptions are made, not the exception itself.