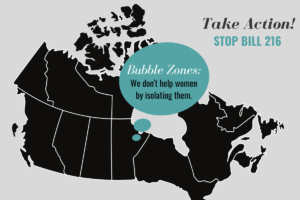 For the second time, Manitoban MLA Nahanni Fontaine has introduced a private member’s bill that would establish buffer or “bubble” zones around abortion clinics. Just like her previous attempt, her new bill (Bill 216: The Abortion Protest Buffer Zone Act) would make it illegal to express the pro-life viewpoint – or even inform anyone about abortion – outside of a facility where abortions are performed.

This is a private member’s bill and it is likely that it will not get the support of the Manitoba legislature. The previous attempt was decisively voted down. While this bill may not even get to a vote, take a moment to encourage your MLA to support access to information for women facing an unplanned pregnancy.

Despite its name, Bill 216 is not primarily concerned with limiting protests; that would be done by limits on crowd size, noise levels, etc. Instead, this bill targets a message – the pro-life message. It prevents women from being exposed to a life-affirming message or learning about their options near an abortion clinic. Abortion is often described by post-abortive women as the hardest decision of their life – this law further isolates them in this moment.

This bill goes even further than the past attempt by including buffer zones around schools. This means it would be illegal to advise a student at high school not to have an abortion. There is no equivalent prohibition, however, from pressuring her to have an abortion, despite very real concerns that women are pressured to have abortions. One study found that “well over half of the abortions had first been suggested by boyfriends or spouses. Afterwards many expressed vivid anger towards boyfriends, parents, and physicians who they felt had coerced them.” MLA Fontaine should be concerned about any woman, especially high school women, being pressured into having an abortion.

If you live in Manitoba, email your MLA today asking them to oppose Bill 216. Below is the list of MLAs who voted on the previous bill in 2018.

Voted against bubble zone in 2018: