Watch the video for a summary of the “difficult circumstances” argument for abortion, and why it doesn’t make abortion a solution. Read below for more!

For Dr. Foster in The Turnaway Study, abortion is fundamentally about “choice,” as we saw in a previous post in this series. This combines with another frequent theme throughout the stories: the hard circumstances of the women seeking abortion. For these women, their circumstances are driving them to choose abortion over parenting, whether those circumstances be their relationship, financial situation, or career aspirations.

Between not choosing to become pregnant in the first place and women’s difficult circumstances, the assumption is that the solution is to be, well, un-pregnant. 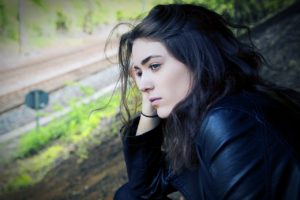 The lie of abortion: the unchosen pregnancy is the problem

Abortion at its core sees the pre-born child as a problem that needs to be erased. But women who seek abortions are capable of parenting, as the vast majority of the women denied abortions prove. The fallout out from this misidentification of the problem means that the real problems women face are not being addressed.

This came out in reading Martina’s story. Despite seemingly being sure of her choice to abort, she could not stop crying at the clinic. To comfort herself she read through journals that contained stories of previous clients. “One story I read, a woman’s husband wouldn’t let her get birth control, and she kept getting pregnant. Since she was able to pay for abortions with cash, he didn’t know that she was continually getting abortions because she continued to get pregnant. And they already had, like three or four kids. He basically thought that he was right, she didn’t need to have birth control, they just won’t get pregnant again, you know? But no, she had three additional abortions because he wouldn’t let her get birth control.”

Martina was comforted by this story and others like it. She concludes her personal reflections saying, “Hopefully we can agree that it’s difficult no matter what you choose, and people just need to be supportive. Women don’t need to be told this isn’t the right choice.”

In Martina’s eyes the woman in the story was facing troubling circumstances that necessitated abortion as the solution. Rather than either leaving or standing up to her husband, having a clear conversation about the consequences of their actions, this woman used abortion to continue her life as it was. How is that helping her? I’ll agree with Martina that it is a difficult situation, but I will most emphatically question why allowing the situation to continue is supposed to be good for that woman.

Where adoption fits into this narrative

The assumption that difficult circumstances are fixed by abortion is also starkly challenged when Dr. Foster discusses women who were denied abortion due to being past the gestational limit allowed at the clinic. Dr. Foster had an expectation that the problem would remain the unchosen pregnancy, and the women would still seek a way out of becoming a parent. And yet, she was “surprised how few of the women who wanted to abort their pregnancies decided to place the child for adoption when they were unable to get an abortion.”

Dr. Foster, seemingly logically, assumed that women who wanted abortions would still not want to parent even if they were denied abortions. She assumed that abortion and adoption are comparable alternatives – both ways to avoid parenthood. But the data doesn’t bear this out. Instead, a week after being denied an abortion, only 14% of women were considering adoption and only 9% actually chose that route.

One of the main reasons that women didn’t choose adoption was because they ended up with more support from their community than they thought they would have – their circumstances weren’t as bad as they thought. All this points to the reality that Dr. Foster’s concern over the “chosen” nature of a woman’s position is overstated and we should be paying a lot more attention to women’s circumstances.

To be clear, adoption is a radical, loving, pro-life option. But generally, women don’t choose adoption even when denied an abortion. Abortion and adoption are not natural alternatives to each other, as they are based on very different foundations. Adoption, like parenting, at its core acknowledges the value of the child before and after birth and seeks to place that child in a setting grounded in self-sacrificial love.

If adoption is not a common choice for women denied abortion, we need to again consider real challenging circumstances and real solutions. Frederica Mathewes-Green discusses the influence of circumstances in her book Real Choices. She points out that the appeal of abortion is like that of an eraser. “Denial is an attractive response to many difficult situations in life, and abortion serves denial better than adoption or childrearing would.” There can be a desire to return to a life just like it was before. But the problem is that such a rewind is impossible.

In the meantime, the pro-life movement doesn’t want to erase or deny women’s real problems. We don’t want to allow abusive relationships to continue, or leave women unsupported and alone. We want to come alongside each woman and help her realize her potential. She might think she can never finish school and have a child, or never have a career and have a child, or a whole host of barriers. But the pro-life message is that women can succeed without erasing their children.

Tagged: abortion and hard circumstances,abortion as a solution,adoption and abortion,do lots of people give up babies for adoption?,the turnaway study,will abortion fix my problems, Thoughts or Feedback? We’d love to hear from you!