Thank you so much to Julia for sharing her family’s story with us and giving us permission to share it here. 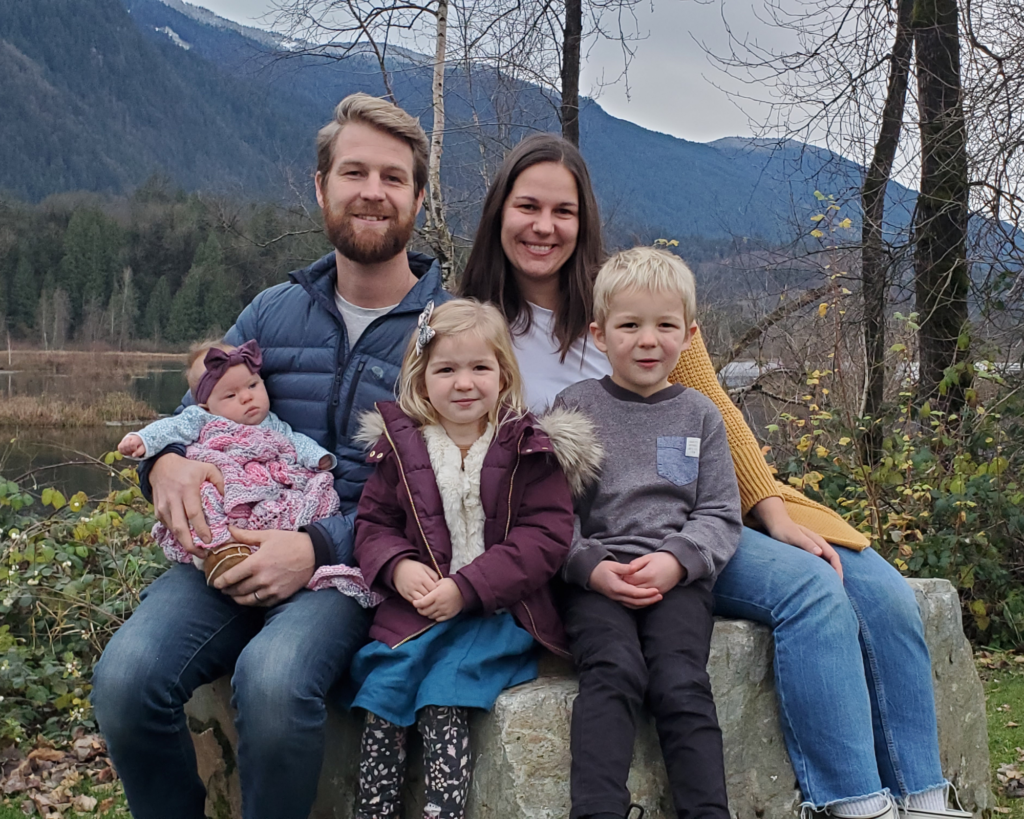 Jane Natasha was born two weeks early, on August 14, 2020. It was a very easy labour, and she was small, just over 6 lbs. It wasn’t until the next evening, after we had announced her arrival to all our friends and family, that a doctor came in and checked her over and told us she was going to call the pediatrician in because Jane had low tone. I didn’t know too much about what low tone (hypotonia) was, so I looked it up and saw the words “Down syndrome.”

Our story may be a little different than many, as we did not have a prenatal diagnosis, but found out a day after Jane’s birth. I had thought to myself soon after she was born that she looked a little like she had Down syndrome, but I thought that was unlikely, and shrugged it off. So after the doctor told us that she had low tone, I looked it up on my phone and found all sorts of information that scared me. My husband and I talked about it together. We checked all the markers to see if she had them … did she have a gap between her toes? Sort of, but so did I. Did she have a palmar crease? No. But her eyes … they definitely had that shape to them.

I prayed and begged to God, “Anything but Down syndrome, please let it not be Down syndrome.” Now I feel incredulous and even ashamed that I felt that way. But we worried and hoped the pediatrician would come and thankfully, she did come that night. She took about a five-second look at Jane and then said, “She has low tone. This is really common in babies with Down syndrome.” As soon as she said those words, I burst into tears and couldn’t calm down. My husband asked the doctors if we could have some time alone and we both cried. We prayed, called our parents, messaged our families, messaged our friends, asking for prayers.

My pregnancy was normal, although the checkups were different because of COVID-19. Everything looked fine, and at the 20-week ultrasound there were no concerns except that the baby’s head was measuring small. I had another ultrasound but “passed” that one, so that was the only indicator we had that there could be anything different about our baby. We promptly forgot about it. I did not do the genetic screening, and sometimes I wish I had known prenatally about our daughter’s diagnosis so that I would have had more time to prepare. But other times I am happy that we didn’t have to go through the pregnancy knowing about it, and having to meet with genetic counsellors and have those kinds of conversations with doctors. Also, because Jane’s diagnosis was undetected in my pregnancy, it meant that she didn’t have any of the serious health concerns often associated with Down syndrome – no holes in her heart, for example.

We didn’t get the official results for Janie’s Trisomy 21 until the week after her birth. The doctor called to confirm the diagnosis, but we already knew from the first moment the pediatrician mentioned it that our little girl definitely had Down syndrome. The doctor who had first told us about the low tone had also said, “She’s a beautiful baby,” which has always stuck with me. 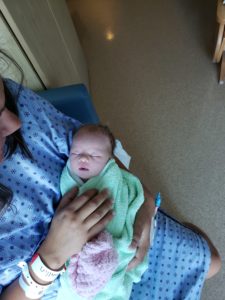 By the next day we were already feeling better, although there were a lot of ups and downs after that. We met with a social worker in the hospital, which was very helpful. She gave us resources from the Fraser Valley Down Syndrome Society (FVDSS) and information about a postpartum group I could connect with. Jane was doing very well in the hospital, besides a bit of jaundice, and the pediatrician was not concerned about anything. She had some routine blood tests for thyroid, and when she was almost 2 months old, we went to BC Children’s Hospital to get her heart checked out, which thankfully had no problems at all.

A few weeks after Jane was born, we were visited by the founding members of FVDSS. This connection was so helpful. Their children were just transitioning into adulthood, and it was great talking to them about what that was like. I had also been connected to a Christian mom on Instagram that had an almost 3-year-old with Down syndrome, a friend of a friend. She was so helpful and answered a lot of my questions and encouraged me.

Our minister and his wife visited, which was also so encouraging, and we had an immediate connection because their daughter has an unknown genetic disorder and, although very different from Jane, they could relate to what we were feeling. One thing my husband and I first worried about after finding out was how it would affect our other kids. Would Luke’s and Ruth’s lives be worse off now that they had a sister with Down syndrome? We wouldn’t be able to give them the attention they needed, I thought. Our pastor and his wife encouraged us that it would be fine, and not just fine, but our children would even be better for it.

I joined a few online groups that were recommended to me by my Instagram friend and that is where I would say the change in me started happening. I loved our daughter but was still scared of Down syndrome and unsure about the future. These groups gave me a place where I could ask any question, answer others, and see beautiful photos of cute babies. From there I joined a breastfeeding group, which was the most helpful for me because I was struggling with feeding Jane.

After joining, things improved and I became more relaxed, and as the weeks passed, I was able to pass on my own tips to new moms. I joined a Christian group for BC moms, a group chat for BC moms with kids 3 and under, and Darryl and I both became members of a BC parents’ group (which has over 400 members). Those groups introduced us to older kids with Down syndrome and opened up discussions about things that we will need to know in the future, which helped us to become a little more confident.

Overall, we had a positive experience with our healthcare providers. The doctors and nurses in the hospital were caring and kind, as were the maternity doctors at the office for follow-up appointments. The pediatrician who diagnosed Jane has become our personal pediatrician and she has been wonderful. It wasn’t until after talking with other parents that I realised that our experience was not the same as others’, especially those who receive a prenatal diagnosis.

The amount of women who have told me (in BC) that they were pressured to abort after a prenatal Down syndrome diagnosis is horrendous. There seems to be a genetic counsellor at Women’s Hospital who is very negative about babies with genetic conditions. One woman was told her baby wouldn’t be able to move and that it would be like having a “dead baby.” Other people were pressured by family and friends, telling them they couldn’t listen to parents who have children with Down syndrome because those parents would be biased. One nurse had a co-worker who told her that she aborted her baby with Down syndrome because she didn’t want a baby “like that.”

It makes me angry and so, so sad to hear these stories, and also so thankful that it wasn’t something I had to experience. All of the people I’ve met who have children with Down syndrome are so positive and upbuilding. They want to shout their children’s worth. I feel that in my community and church circles I don’t have to do as much shouting – we all know that Jane is a child of God and is special no matter what. 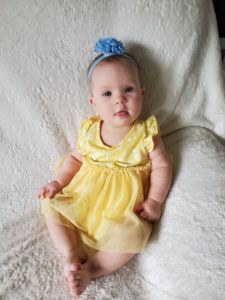 What I most want to say is this: I know now that all the feelings we felt were part of a grieving process. We were grieving the child we thought we would have. But, as I read somewhere a few days after Jane was born, in our case the “problem” was actually the solution. We didn’t have the baby we expected, but we did have a baby, and had to take care of her and love her. A lot of parents say that, looking back, they wish they wouldn’t have cried or been so worried, and I totally agree. I understand those feelings are natural, but really our problem was fear – we were scared that our life wouldn’t be “normal”, that our other kids would suffer, that Jane wouldn’t have a good life, that we wouldn’t be good enough parents. And I think that part of that is because of ignorance about Down syndrome and other disabilities.

We’ve learned so much in the last 7 months that I really do feel I’m a stronger and less fearful person. I look at people with disabilities a lot differently than I used to. I think education for everyone is important, and to have that we need up-to-date information. We need real-life stories, not just facts about what could go wrong. The best thing for us was connecting with other parents in the Down syndrome community. 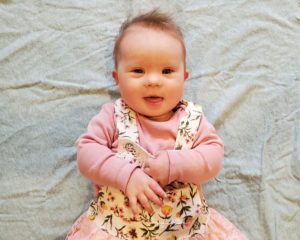 Jane is one of the healthiest babies with Down syndrome. A lot of women with prenatal diagnoses find out because of health concerns with their baby that show up on ultrasounds. And I’ve seen many tough babies go through a lot. But every mom I’ve talked to says that it’s all worth it and that they love their child so much. I can see it. And it’s important that everyone sees it.

We know that Jane is a child made in the image of God. Her Creator loves her and put her in our family for a reason – and I am thankful to Him every day now for giving her to us. God helped us through the beginning of Jane’s life and we know He’ll continue to be close to us for the rest.

An Ontario MPP has introduced a bill that would change the way a prenatal diagnosis of Down syndrome is given, including giving parents time to process before suggesting abortion or any further testing. We would love to see legislation like this introduced in every province – as you see from Julia’s story, supportive and encouraging voices can make a huge difference in a family’s journey.

If you have a story to share, we would love to hear from you!