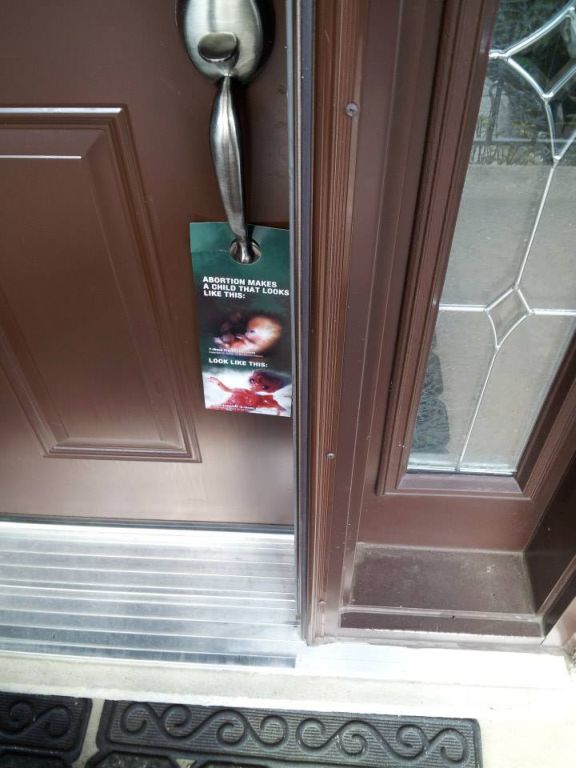 “It would have made your eyes water if you saw it.” That was the reaction of Chilliwack resident Ms. Mallory when she received a flyer on her doorstep depicting a picture of a dead Rwandan child “killed with machetes” and a picture of an aborted fetus “killed with suction machines”. The graphic anti-abortion flyer delivered to Ms. Mallory’s door is part of a local project being carried out by Valley Against Abortion, a Chilliwack area pro-life group. According to the news story in which Ms. Mallory is quoted the group has already handed out 3,500 flyers in Chilliwack and they have plans to spread them throughout the entire Fraser Valley.

Ms. Mallory’s reaction is telling, as images of dead babies should evoke this type of emotion from every human being. That abortion is juxtaposed with the treatment of Rwandan children is entirely accurate; it is the injustice of both situations – the inhumane treatment of human beings – that is fundamentally the same.

The Rwandan genocide was exposed to the world via images, and people were rightly aghast. In fact, it is because the slaughter of the Tutsis was brought to us in such vivid imagery that world leaders sought to deal with this human rights violation of epic proportions. So also, the atrocities being perpetrated against children in the womb need to be exposed to the world in order for this current human rights violation to be addressed.

Residents of Chilliwack have a right to be angry, as do all Canadians exposed to the graphic imagery of abortion. But our anger needs to be properly directed. When we became aware of the Rwandan genocide by way of the vivid imagery shown to us by the news networks, we did not express our anger towards CBC News or the Globe and Mail. Instead, we directed our anger toward the ideology that allowed, or even encouraged, such violence. So also now, let us not direct our anger at those who show us what abortion does but against the ideology which allows for the lawful killing of children in the womb at any stage of pregnancy.