Abortion advocates love to talk about everything but abortion. Whenever the topic comes up they resort to using inaccurate terms and generally speaking, focus the discussion on anything but the procedure itself. Taber Times columnist, Mr. Schnarr did this just last week in this article. Considering his worldview was so openly challenged, it is understandable he would react so loudly. 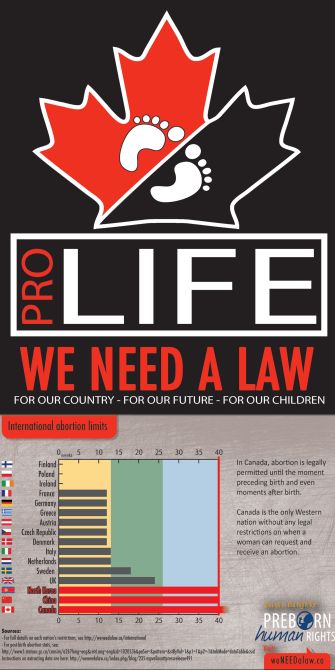 At issue was the full-page colour advertisement (pictured) in the Taber Times purchased by Taber Pro-Life. The ad displayed a simple bar graph comparing limitations on abortion from various European countries with those of North Korea, China and Canada. It certainly brings awareness to something many Canadians do not know – Canada, along with North Korea and China are the only countries in the world with no legal protections for pre-born children right up until birth.

A ‘woman’s right to choose’ has long been the rallying call of the pro-abortion movement and now we are increasingly see the term ‘anti-choice’ being used to describe Canadians in favour of limitations on abortion. Mr. Schnarr also uses them throughout his diatribe against Canadians in favour of (even some) abortion restrictions. The problem is these terms should have been rejected long ago. Why? Because they are incomplete sentences. The verb “to choose” is a transitive verb, meaning it requires a direct object. To say, “I have a right to choose” leaves the listener wondering about what exactly it is that the speaker plans on choosing. As a journalist and author, Mr. Schnarr should know this.

Think about a different example. If you walked up to someone on the street and said, “Do you support a woman’s right to take?” or “Are you anti-take?” I can almost guarantee you the first question they would ask is “Take what?”

As the advertisement in the Taber Times accurately shows, almost all European nations protect fetal rights after 13 weeks gestation. In 2010 Canada’s lack of any abortion laws resulted in nearly 10,000 reported abortions when the foetus was between 13 and 20 weeks gestation.

Abortions after the woman is 13 weeks pregnant are performed by a dilation and evacuation procedure. Because the fetus has grown larger and his or her bones have become harder, the baby becomes difficult to extract. The cervix must be opened wider, and the head of the baby must be crushed before it can be removed. Bone fragments are sharp and must be carefully removed to avoid damage to the uterus and cervix. The parts of the baby must be identified upon removal to make sure the abortion is complete. Suction is used for a final clean out of fetal or placental tissue that may remain behind.

When Mr. Schnarr says the lack of a law limiting abortion is a good thing and something “we should be proud of” he is in favour of Canada standing with only North Korea and China in condoning this barbaric practice. Modern technology allows us a clear window into the womb. The majority of Canadians now understand that this particular choice is a violation of human rights – no human being should have the power to impose that kind of choice upon another human being.