One of the three main issues we’re tackling in this fall’s lifeTOUR is sex-selective abortion. It’s not an issue people like to talk about – killing babies because they’re a girl instead of a boy, or vice versa. Official birth rates have long shown this happening in countries such as China and India, but the numbers in Canada no longer add up either (1). A 2012 investigation by the CBC (2) called it “unnatural selection”, and that’s exactly what it is. 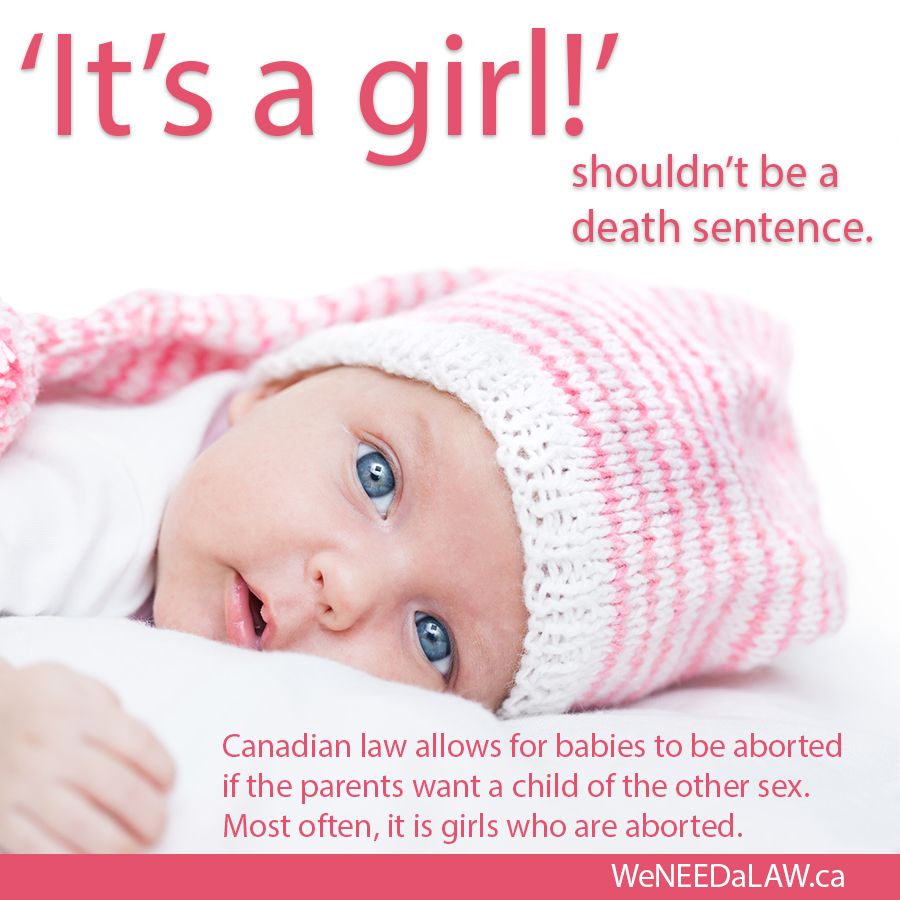 So far the discussion has mostly focused on the preference in certain ethnic groups for boys, as they slowly increase in the number of live births, while girls slowly decrease. This is, however, only part of the truth, and only the beginning of what is sure to be a growing problem in Canada if unfettered access to abortion continues.

A practice in the United States, referred to as “family balancing”, now shows a preference for girls among Caucasian parents seeking fertility assistance (3). This means the imbalance we see in the birth rate may be minor only because boys are being killed on an almost equal basis with girls. Online forums are busy with women discussing how badly they want a baby of the gender their other children are not, and fertility doctors, naturally, are happy to offer their services in a rapidly expanding market.

A quick search finds genderselection.com and genderselectioncenter.com as only two of many such sites promoting the chance to deliver exactly the child you want. Pre-implantation genetic diagnosis (PGD) can determine a baby’s gender before the parents decide to go ahead with the pregnancy. In Canada, sex-selection of embryos for in vitro fertilization is currently illegal; at one point we clearly recognized the inherent gender stereotyping this would support. However, it isn’t difficult to join an online forum, and doctors busy networking on these convenient forums are happy to offer their services to Canadians who come south of the border. This narcissistic desire to create the “designer family” doesn’t come cheap – PGD can cost upwards of $15,000 for one pregnancy (3). The poor man’s “family balancing” alternative? Taxpayer-funded sex-selective abortion.

Such attempts to control our reproductive outcomes are certain to end badly. One self-published author who wrote about her experience with gender selection gave her reasons: “I’m not into sports. I’m not into violent games. I’m not into a lot of things boys represent and boys do.” (3) So not only did she not want a boy, she wanted a stereotypical princess-and-nail-polish-loving girl. Marcy Darnovsky, director of the Center for Genetics and Society, hits the nail on the head with her response to the idea of sex selection: “It’s high-tech eugenics,” she said. “If you’re going through the trouble and expense to select a child of a certain sex, you’re encouraging gender stereotypes that are damaging to women and girls. What if you get a girl who wants to play basketball? You can’t send her back.” (3)

We’re already in a state where 1 in 4 pregnancies in Canada end in abortion (4), and right now it is believed that sex selection is the reason for only a small percentage of those. But, as with the latest style of blue jeans, the latest style of baby genes is sure to catch on. Parents will no longer simply enjoy the children they are blessed with, but will decide for themselves what will be their best fit. The expectations such children are born into will create a society where life is not valued, but conformity to gender stereotypes is. In such a society, women will decide what they want while men are pushed to the sidelines, periodically asked to give sperm for testing to ensure they do not hinder perfect family progress.

Abortion, as a taxpayer-funded medical service, is the most affordable sex selection option available, and one with no questions asked. Thriving pre-born children are being killed in unknown numbers because they did not have the appropriate genitals to make their parents happy. By not having a law banning sex selective abortions, our government encourages gender stereotypes and inequality of the sexes. By simply having ultrasound clinics wait until the 30-week mark to reveal sex, our government can save the lives of those babies unwanted simply because of their sex, as most doctors will not perform an abortion at this stage on a healthy pre-born baby.

If you think sex-selective abortion is wrong, please join with us in standing up for an inherent right to life and equality for both boys and girls, starting from the very moment we know whether they are boys and girls.

Tagged: abortion,family balancing,lifeTOUR,sex-selection,sex-selective abortion, Thoughts or Feedback? We’d love to hear from you!