Summer is a great time for professional development! I am thankful to ARPA Canada for not only allowing, but encouraging the staff to set aside some time every year to steep themselves in a period of learning.

For the past few days my colleague Colin Postma and I have been in Winnipeg, Manitoba attending the ‘Understanding and Answering Summit on Human Rights’ hosted by Ravi Zacharias International Ministries (RZIM). The best part is that I’m in Winnipeg, in the summer, and I’ve only seen one mosquito. 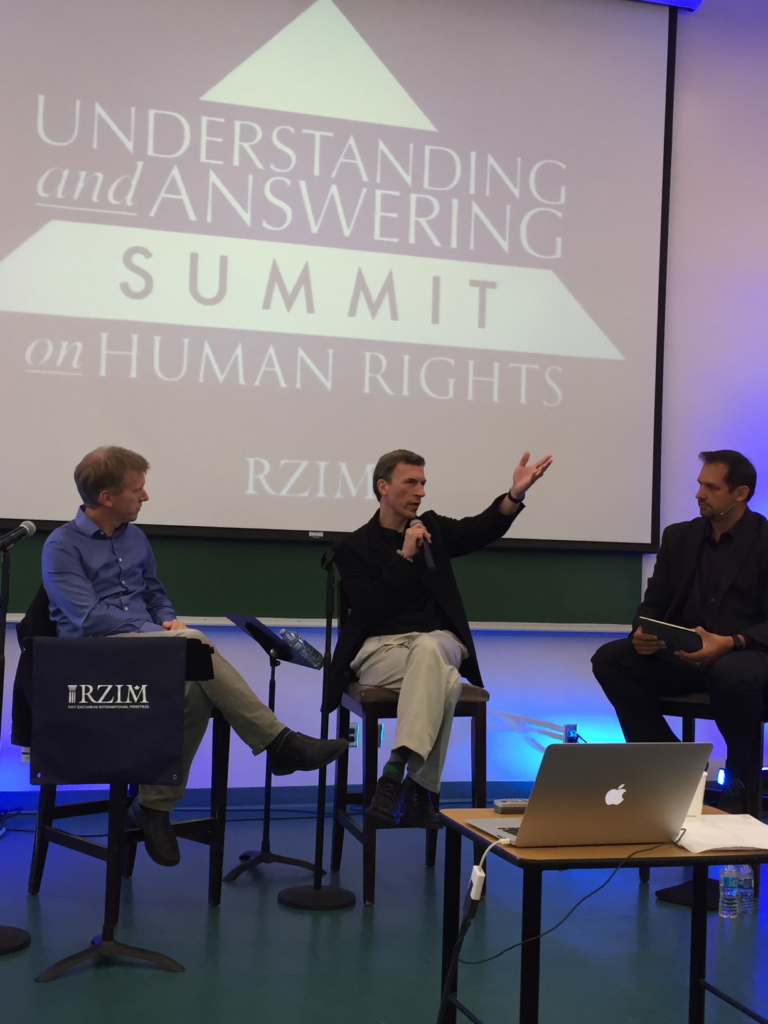 Among other presenters and Christian apologists, RZIM also invited an atheist to the summit. Dr. Christopher DiCarlo, a professor in the Faculty of Human Biology and Philosophy at the University of Toronto, agreed to a dialogue with Dr. Andy Bannister, the Director of the Solas Center for Public Christianity at the Canadian Museum for Human Rights. The theme for the dialogue was “Human Rights, by Design or Default” and it was attended by approximately 450 people, many of them Christian, but also many who were simply interested in hearing both perspectives.

The following day we were treated to a more intimate conversation on the same topic. The conversation meandered through various topics before the subject of artificial selection in utero came up. Dr. DiCarlo, who, incidentally, was a friend of Dr. Henry Morgentaler and even gave a eulogy at his funeral, acknowledged that this has occurred in the past and pointed out that it still occurs today. He referred to it as “systemic selection” and explained how fetuses are terminated based on sex and ability. When pressed as to whether this was right or wrong Dr. DiCarlo expertly made the case for how, at the point of fertilization, a new life has begun, and that to allow the life to develop was his preference. In fact, his words were, “Just leave it alone”. I thought I was listening to a pro-life apologist! He was speaking truth about pre-born children! That is, until he said, “But it is still a woman’s choice.” When the inconsistency of his position was pointed out, DiCarlo again emphasized a woman’s choice, and then the discussion had to move on.

I really appreciated DiCarlo’s response that as much as possible we should “just leave [the embryo] alone.” It was a response that revealed his heart. But, in spite of the emotional connection to the developing human being, he still came to the conclusion that abortion was solely a woman’s choice. I couldn’t help but think back to the dialogue at the Canadian Museum for Human Rights the previous night. In putting forward the “human rights by default” position, Dr. DiCarlo proposed a “Value Theory” whereby right and wrong are determined by neurochemical reactions within our brains which can then be transformed into community values. The logical extension of this is that because society has agreed that abortion is a woman’s choice then it must be that way.

DiCarlo and Bannister have had previous dialogues, and the respect they have for one another is admirable. Witnessing their conversations this week was to observe a striking contrast in worldviews; one based on ever-shifting sand, the other on the rock of Jesus Christ. I came away with a sense of sorrow for Dr. DiCarlo, indeed all Canadians whose worldview does not acknowledge Truth, even in the midst of speaking truth.