Every year in May, thousands of Canadians converge on Parliament Hill in Ottawa for the March for Life, the largest annual march in Canada. Other cities across the country host marches in solidarity with this march on our government’s doorstep. This year, Toronto will join with its first-ever March for Life. 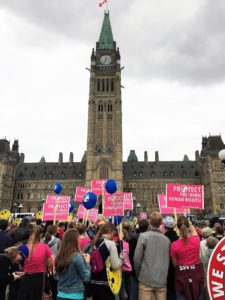 The March for Life is a significant event for the pro-life movement. Thousands of people take time out of their schedules to add their voice to the message that pre-born children need protection in our country. But has it made any difference for pre-born children in Canada?

Unfortunately, the answer is no.

So why keep marching? It’s a valid question. There are so many other things we do throughout the year that make a difference, places where we are seeing very real progress. This progress is likely to be the reason for the change we see coming, both federally and provincially, when it comes to protecting our pre-born neighbours.

The march has a foundational problem: for many, this is their single day of activism to check the box of “being involved in the pro-life movement” for another year. For those who are personally involved in other ways, this is still the closest they come to political involvement in the pro-life movement. They don’t know their MP, MPP or MLA, they quietly shake their heads when a bubble zone is introduced in their province, they don’t engage in community debate through letters to the editor or putting up a lawn sign. As the election approaches, they consider a candidate’s position on the economy, the budget, the environment. A pro-life or pro-choice position is seen as secondary.

Political change requires a long view. Consider the legalization of euthanasia and assisted suicide. The work that went into this change began decades prior to the change happening.   A few people advocated tirelessly for the “right to die”, and their work has impacted all Canadians through their impact on elected lawmakers. While the majority of Canadians may disagree with the premise that doctor-assisted suicide is the answer to chronic illness, the fact is that persistent political advocacy and legal challenges led to nationwide change. Now, many people who would never have considered having their doctor take their life will have the option presented to them as legitimate. All doctors, nurses and patients will be impacted by a law brought in by a few, for a few.

In Canada, we need to work with the same dedicated, passionate persistence we see from those on the other side of life issues. Too often, politicians view pre-born children as a political liability. We want them to know that the opposite is true: continuing to ignore the human rights of the vulnerable will be a political liability. Ever-improving ultrasound technology means no one argues anymore that what is growing during pregnancy is non-human. We are simply at a point where it’s more convenient to ignore that fact and the rights that would come with acknowledging it. This is not a place we can stay comfortably for much longer.

The difference made by political engagement will not be as immediate and tangible as adopting a child, or volunteering to counsel or house women facing crisis pregnancies. Those things are absolutely essential, and pro-lifers should be at the forefront of these efforts. But political engagement should not be downplayed – it is equally essential to the lives of pre-born children.

Abortion has become a big business, and women are caught in the lie that it’s a business there for them. In fact, it’s an industry that depends on them for its existence and its profits. Personal, local action is necessary to love women and their pre-born children. But political action is also necessary to drive change and enact laws that will have far-reaching consequences for all women seeking an abortion.

Marching, no matter how many people show up, is not likely going to save any lives. Abortion has been legal in Canada for 50 years, and unregulated by law for more than 30 years. Approximately 100,000 babies are aborted every year. This is a brutal reality that will not change without political action.

So why march? Attending a March for Life is a great way to be surrounded by pro-life Canadians, and to inspire each other to further action. But marching is just one of many ways to get involved – we have lots of ideas here to get you started! Whether or not you march, be part of the growth and energy of the pro-life movement, both personally and politically, all year long.