The following post was shared with us by supporter Jolena de Haan after she and her daughter participated in the Edmonton March for Life on May 9, 2019.

My 12 year old daughter participated in her first protest march yesterday. The world tells my daughter to March! Fight! Stand up! Be firm in what you believe to be true! So she did; I couldn’t be more proud. She held her sign and marched. She had just learned in depth at school about our democratic legislature, and she knew how powerful and entitled she was to march.

Yet, as she marched, she was yelled at. Booed. Taunted. The world hated her marching.

Why are they yelling at me? she asked.

They don’t like your reason for marching, I said.

But I’m fighting for those who can’t, she said.
That doesn’t matter to them, I said.

But I don’t agree with them and I’m not yelling at them, she said.
I know, I said.

But what if we were all aborted? Then there would be no Edmonton, she said.
True, I said.

What if the kids who were aborted could have grown up and actually helped them? she said.
We’ll never know, I said.

But I’m not against women, Mom…I’m going to be one! she said.
Yes, but sometimes its very hard to support a child once its born. Women want the right to kill the baby first, I said.

But there are places that want to help them, she said.
Maybe no one has told them, I said.

And what about the baby’s rights? she said.
They don’t matter to many people, I said.

I saw the March for Life through her eyes and tried to shelter her from the hate. She knew she had the right to be there. She knew that Canada was the only democratic country in the world that has no laws defending the unborn. She knew that a baby just seconds prior to their first breath in Edmonton can be aborted.  She protested the injustice, like the world has told her to do.

Yet they hated her.

My daughter had her first personal exposure to conflicting ideas smashing their heads on the streets of Edmonton. These streets scream love and tolerance for all Edmontonians – except for those that live in the womb, and for those that march for them.

Wake up, Edmonton! Celebrate a 12-year-old who has passion, a vision and a fierce desire to fight for the weakest members of our society. Applaud a preteen who isn’t even marching for herself, but for the most vulnerable. Don’t demand action and passion from our youth and hate them when they show it. May her efforts from yesterday’s March for Life send Edmonton the message she wanted: the unborn deserve rights, too. 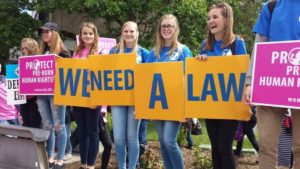 Young people standing up for pre-born children at a March for Life.

Tagged: edmonton,March for Life,pro-life generation,young people, Thoughts or Feedback? We’d love to hear from you!