Because of pro-life Canadians, we have seen a growing debate about abortion. You’ve used your voice to talk about pre-born human rights. Whether it’s sending an email to your MP, putting a decal on your car, going to a March for Life, participating in SignsUp, or writing letters to the editor of your local paper, you’ve used your voice to speak for those who cannot speak for themselves.

Recent events are a testament to this growing discussion: the backlash to the Canada Summer Jobs attestation, Prime Minister Trudeau’s disallowing of pro-life views in the Liberal party, the Canadian funding of abortions overseas, the movie Unplanned, and the tragedy that a pre-born child cannot be recognized as a victim of crime. Canadians, including the media, politicians, and the general public, are talking about abortion. The debate is happening, and as voters this October we should expect MPs to represent us by engaging in this ongoing debate.

We are seeing this impact already in the lead up to the October 2019 federal election, including last week when Conservative leader Andrew Scheer held a press conference to deal with questions about his socially conservative views, including his view on abortion.

During his run for leadership of the Conservative party, Scheer went on record saying that while a Conservative government would not bring forward abortion legislation, private member’s bills could be introduced, and would be handled by a free vote. Since then, Scheer has not said much. In the press conference, he spoke again about recognizing MP’s freedom of conscience, but said he will “oppose any measures or attempts to open this debate.”

Scheer blames the Liberals for bringing up the abortion issue. But, it’s not only the Liberals who are talking about it; there are a growing number of Canadians who are looking to their elected officials to do something about the lack of abortion legislation. In fact, the case could be made that Scheer is the leader of the Conservatives as a direct result of Canadians who want legislative action on pre-born human rights. Scheer only has himself to blame if he’s wondering why abortion continues to be part of the election narrative.

Canadians are looking for a clear response. The question is, if an MP under a Conservative government puts forward a private member’s bill on abortion, what will Scheer do? Will he recognize that the MP is representing their constituents’ desire to see abortion debated in Parliament? We applaud his commitment to freedom of conscience and his party’s policy reinforcing this. But what does it mean, then, that he will “oppose any measure or attempt to open this debate”? Especially as the leader of a party, Scheer has a lot of influence even beyond government bills.

We have plenty of reasons to believe he will allow the debate, despite some of Scheer’s vague statements. He does still give strong acknowledgement to the freedom of conscience of MPs. Another indication comes from pro-life MP Arnold Viersen’s recent Facebook post: 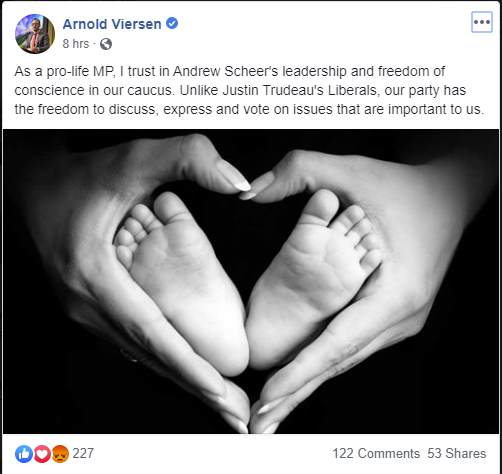 What should you do?

Politicians are commenting on this because Canadians are talking about pre-born human rights. Keep that conversation going! Use this election period to ask your local candidate where they stand on this issue. Use the questions on our doorhanger to begin the conversation and ask any candidate how they will engage in the ongoing debate on abortion. Let them know that you expect your representative to participate in that debate in Parliament even after this election.

If you find a good pro-life candidate, consider volunteering for them. Continue to build the relationship and have that discussion about the importance of passing laws that recognize pre-born human rights.

As we have said before, the federal election provides a unique abundance of opportunities to talk to candidates about issues that matter to you. Candidates are listening. Let them hear from those who cannot speak for themselves.

Tagged: andrew scheer,election 2019,pro-life, Thoughts or Feedback? We’d love to hear from you!