“Together, through education and political action we can end the killing in Canada!” 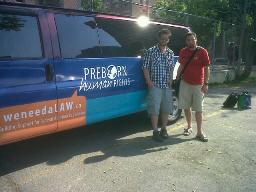 The Canadian Centre for Bio-Ethical Reform (CCBR) has just completed its latest educational initiative. The New Abortion Caravan travelled from Vancouver to Ottawa making visible the injustice of Canada’s greatest human rights violation – the killing of 100,000 pre-born children every year.

The gruesome reality of abortion that was exposed by the New Abortion Caravan is inescapable. It doesn’t leave you. You go home with it. I know I certainly did. The result of this cross-country tour is that Canadians are increasingly uncomfortable as they see what decades of unfettered access to abortion has brought our land. Abortion on demand through all 9 months of pregnancy has become morally unacceptable for a majority of people living in Canada.

I had opportunity to tour with the New Abortion Caravan for the final three stops in London, Toronto, and Ottawa. What became apparent when I engaged the public as part of Choice Chain activities was that most Canadians are unaware that we have no laws protecting children in the womb at any point during pregnancy. Time and again I had to inform people that Canada has no law preventing abortion. No legal protection for pre-born children at any time during all 9 months of pregnancy.

The people I spoke with were clearly shocked when I informed them of this reality. In fact, most Canadians are not in favour of the current status quo. A recent survey by Postmedia News and Global TV found that 60% of Canadians want abortion to be restricted.

Canada, North Korea, and China are the only countries in the world without legal protections for children in the womb. Every other democracy has protection for pre-born children. Some, such as Ireland and Poland have legal protections in place throughout all 9 months of pregnancy!

WeNeedaLAW.ca (WNAL) was initiated in order to create a groundswell of support for federal abortion legislation. It’s our hope that the pro-life movement can unite and together with the majority of Canadians, take steps to have the strong public opinion reflected in public policy.

Clarke Forsythe, Senior Counsel with Americans United for Life once said, “In the democratic process, they [political leaders] must pursue the ideal in such a way that progress is made and with the willingness to accept “something” when “all” is not achievable due to social, legal, or political obstacles beyond their control.”

WNAL by no means consider ourselves political leaders, but we do understand that politics by very nature necessarily involves doing only what is possible in the face of obstacles beyond our control. The question we ask ourselves is this: “If we (Canadian pro-lifers) aren’t working towards what is possible in Canada, who will?”

We can’t let the great work of the Canadian Centre for Bio-Ethical Reform go to waste! They are changing hearts and minds through the educational programs and initiatives they facilitate. It’s up to the political arm of the pro-life movement to work towards having policy reflect the shifting public opinion, each step of the way!

We need a law and the prolife movement badly needs a political victory. We need a foothold, something that will propel us to further legislative victories and the first one is within reach!

WNAL is founded on the principle that all pre-born children are valuable and are therefore worthy of protection.

We also recognize that there are obstacles in our way that we have no control over. We can’t afford to put our efforts into what is impossible in the current cultural climate at the expense of what is possible. It is for this reason that we are working to create a movement that will support legislating what is possible.

We want your help in doing that!

Please visit our website, WeNeedaLAW.ca and add your name to the millions of Canadians who agree we need a law. Make use of the tools to convey this message to the men and women in the House of Commons. It’s the legislators who have the ability to end the status quo and it’s up to us to make sure that they have our support when a piece of legislation is introduced.

Experiencing a week with the New Abortion Caravan made it very clear that CCBR is changing the minds of voters. Now it’s time for the political arm to change the laws.

Together, through education and political action we can end the killing in Canada!