It was the last day of summer, but don’t tell that to the sixty youth who gathered in the cold and drenching downpour on Saturday afternoon to silently protest Canada’s lack of abortion laws. They came with crosses and signs, umbrellas and rain jackets, to witness for Canada’s pre-born children. According to one of the parent organizers, they gathered at three separate locations in the Niagara region: Seaway Mall in Welland, Penn Center in St. Catherines, and in downtown Grimsby. 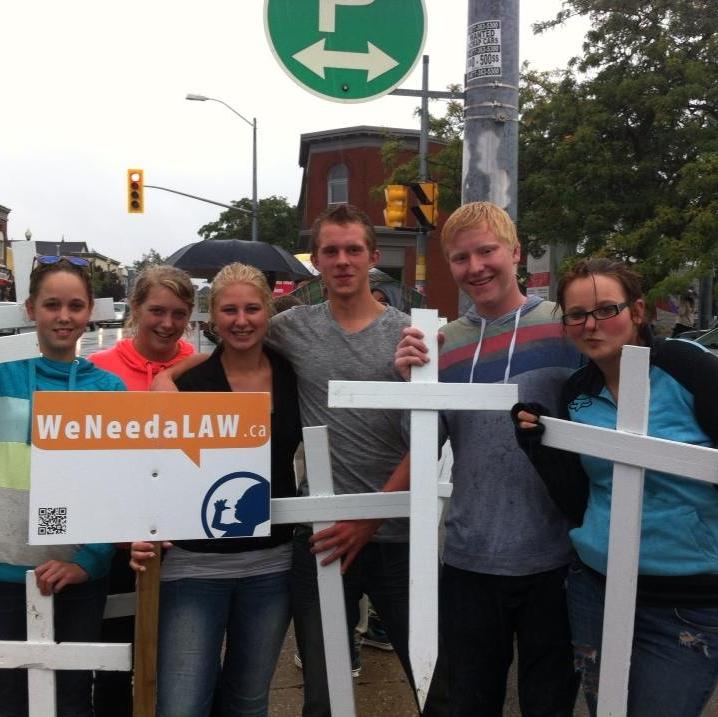 The large group spent an hour at each location in what they referred to as a ‘Living Abortion Memorial’. The event was organized by ARPA (Association for Reformed Political Action) Niagara. Youth in the area “wanted to do something about abortion”, said Ralph Vis of ARPA Niagara. “The living abortion memorial gave them the opportunity to be the voice they want to be,” said Vis. Last fall, the ARPA group set up a fixed abortion memorial consisting of hay bales and crosses. This year they wanted to bring the truth about abortion to the public in a different way. In total, the group held 100 white crosses and many of the participants held signs which read, “Each cross represents 1000 unborn children aborted every year in Canada” and “We Need a LAW”.

When asked why she was part of Saturday’s protest, Veronica DeBoer said, “In Canada there is absolutely no abortion laws. The day before your baby is due you can choose to abort. I want the public to be aware of this! We have to stand up against this!

We need to take a stand! Being at the pro-life cross-holding memorial helped bring awareness to the public because so many people don’t know that there are no abortion laws in Canada.”

Veronica is correct. Most Canadians incorrectly assume that Canada only allows abortions in the first trimester. The fact is that since the Supreme Court struck down the abortion law in 1988, Canada has been without any protection for pre-born children.

We commend these young Canadians and the parent volunteers for staging this event. History is on your side! The more that Canadians are exposed to the injustice of abortion and the myths surrounding it, the less it will be tolerated.