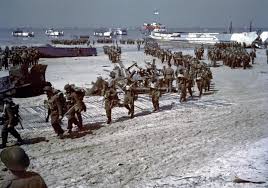 Was D-Day a failure because it didn’t start with Churchill and Roosevelt walking into Berlin?

Of course not, as no one would rightly argue that D-Day was not a success simply because it didn’t end Hitler’s rule. As we commemorate Veteran’s Week and take part in Remembrance Day events this week, we do well to reflect, not only on the sacrifices of Canadian men and women, but also the level of ingenuity and the prowess with which our Canadian military approached each and every battle they were involved in.

“Operation Overlord” as the D-Day battle was known, involved 14,000 young Canadians storming Juno Beach on June 6, 1944. Their courage, determination and self-sacrifice were the reasons for the success. The fighting they endured was fierce and frightening. The price they paid was high – the battles for the beachhead cost 340 Canadian lives and another 574 wounded. John Keegan, eminent British historian who wrote Six Armies in Normandy, stated the following concerning the Canadian 3rd Division on D-Day: “At the end of the day, its forward elements stood deeper into France than those of any other division. The opposition the Canadians faced was stronger than that of any other beach save Omaha. That was an accomplishment in which the whole nation could take considerable pride.” When you are victorious after a battle within the battle it gives cause for celebration!

Conflicts involving military personnel, conflicts over ideas, conflicts about human rights, even conflicts about life itself – all of them include battles within the battle. Consider that, while no one was liberated at Juno Beach, the victory was a turning point in World War II and led to the liberation of Europe and the defeat of Nazi Germany.

History has shown that humans have always been engaged in a battle of ideas. Recall the fall of communism – the idea that all property can be owned communally – after much of eastern Europe engaged in battles of civil resistance.

In more recent times, we witnessed the signing of the Civil Rights Act by President Kennedy only nine short years after Rosa Parks battled for her bus seat – a battle she won by simply saying “no”.

And cultural battles continue in Canada today. There is an egregious human rights violation being perpetrated against pre-born humans and the battle for human rights is being fought on many different fronts. There will come a time when this injustice is also something for the annals of history. When that time comes, we will speak of many battles within the battle, but today we have one more small beachhead on a heavily defended shore from which we will press ever forward. We will not rest; together we will take the next hill and the one after that and the one after that. Eventually we will secure freedom for all Canadians, not because of our strength of will, but because our cause is just.