Today we are thankful to have good news to share: Motion 506 has been voted down in Alberta!

NDP MLA Marie Renaud had put forward pro-abortion Motion 506, urging the government to review access to abortion services in Alberta, and take action to “remove barriers” to abortion across the province.

We asked you last week to engage with your MLA on this issue. Hundreds of you did so, and we are again humbled by the efforts of our supporters. These calls and emails do not go unnoticed by the Legislature, on either side of the debate. When introducing her motion, Ms. Renaud included this: “I’m sure that each of your offices has been bombarded by targeted e-mail campaigns from organized groups right across the country because that’s what they do.”

She’s not wrong. Targeted email campaigns are a great way to remind legislators that the people are watching, and have a vested interest in the decisions made at the government level. These calls to contact your MLA show them just how much people care; that they are willing to take time and effort to engage when they are made aware of the issue.

Ms. Renaud said she was bringing forward Motion 506 because of her belief in human rights and the “right of a woman to control her body and her future …It doesn’t matter why women make those choices, and women should never be forced to share those stories, those very personal stories about why they did. Whether it was about their health, whether it was about economics, whether it was about their age, it really doesn’t matter.” She ignores the stories shared by post-abortive women who regret their abortions and also wrongly cites abortion as a Charter right under the 1988 Morgentaler case, though such a right was never granted in that case.

One MLA who spoke against the Motion was Ms. Glasgo, who stood boldly for her pro-life beliefs. Glasgo said, “It is my personal conviction that all human life is sacred and should be protected. I am unapologetically and unreservedly pro life and my constituents were aware of this when they sent me to this place.”

Glasgo also praised pro-life Albertans for their commitment to helping the pre-born and women, especially through crisis pregnancy centres. In a time when these centres are often slandered, it is encouraging to hear an elected representative give them the credit they deserve. She said,

“These Albertans are compassionate. They give generously to agencies for mothers experiencing a crisis pregnancy. They support families. They objectively and without judgment counsel young women, praying for them and giving them shelter and other necessities. They set up programs and centres that help young mothers get back on their feet no matter their choice. They work to make life better for women and families in times of great need.”

She was not alone in opposing the motion. Motion 506 was soundly defeated, with a vote of 43-11. The discussion focused, as it should, on actual health care concerns for women and the need to end the use of abortion as a political tool.

We are thankful to see this motion die here, with the Albertan government taking a clear stance against increasing abortion access in the province. Let this be an encouragement also to those who communicated with their MLA that your voice was heard and well-represented. Pre-born children need our voices, and our leaders’ voices, and we can bring those together to even greater effect.

If your MLA voted against this motion, send a follow-up note thanking them for their vote. Here is the list of MLAs who voted against Motion 506: 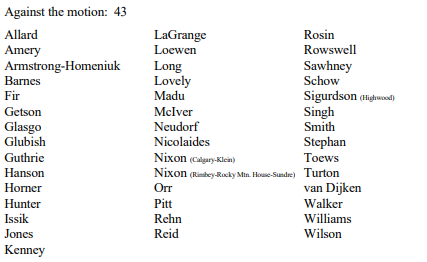