In all but one of the opinion polls publicly available since 2010, a majority of Canadians support at least some law regulating abortion. 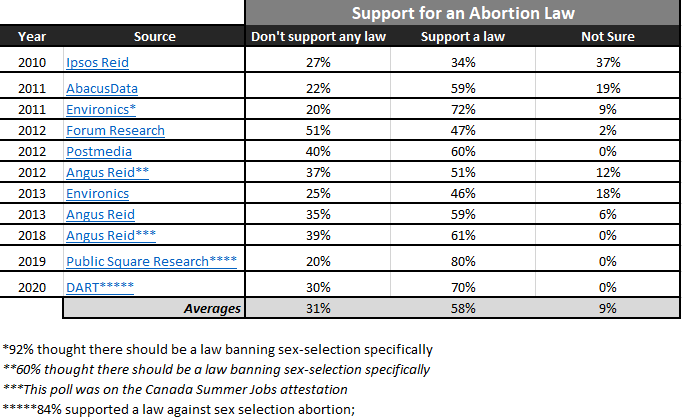 If you look at the polls that ask whether abortion is permissible (i.e. whether you always support a woman’s choice) the numbers are much closer, with an average of 48% supporting a choice at any point, 46% only supporting sometimes, and 5% unsure. 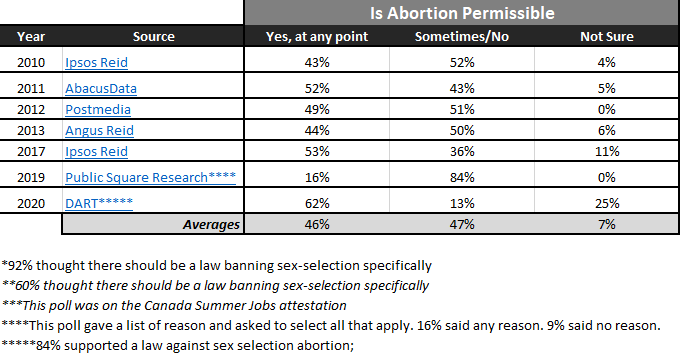 How can we interpret these results? With opinion polls it is always important to look at the methodology, what questions are being asked and who is being asked. For example, if you ask the average Canadian their opinions on abortion you must remember that (according to one poll) 77% of Canadians are unaware that Canada has no abortion law. Saying you support a women’s right to choose may mean something very different if you are assuming a woman can’t legally have a third trimester abortion.

The 2020 Dart poll is an excellent example of this. In that poll, 71% believe a woman should be able to get an abortion for any reason, but at the same time 70% of Canadians think abortion should be illegal in the last trimester and 84% said they supported a law against sex selective abortion.

Since a decision by the Canadian Supreme Court in 1988, having an abortion in Canada is not limited by law. In your own opinion, do you find this in Canada to be

This was a fair question and gives a good picture of where Canadians stand on the general question of the legality of abortion. But the poll did not ask Canadians about specific legislation, meaning we don’t know if the same inconsistency still exists.

Prominent pro-abortion activist Joyce Arthur acknowledges this, saying, “Virtually everyone supports “freedom” and “privacy” so a large majority of people will agree that women should have both. But if specific questions are asked about exactly when fetal life should be protected, women’s so-called “complete freedom” to have abortions appears to take a sudden nosedive.” Abortion becomes far less palatable when you are faced with the reality of what it does to a pre-born human.

If you want to know your opinion on abortion, consider the following:

If you’re not comfortable answering these questions in the affirmative, look at our International Standards Law as a solution. This proposed law would bring Canada in line with all other democratic countries in protecting pre-born children after 13-weeks gestation. It would also allow a waiting period for women seeking an abortion, along with independent counselling to ensure proper informed consent and to screen for coercion or abuse.

It’s time we acknowledge that abortion is not only about women, but also about pre-born human beings. It’s time for a law that protects them, while supporting the women who carry them.