It’s time Canada started regulating abortion. We are advocating for a law that would ensure all women seeking abortion have access to independent counseling, and a 48-hour waiting period between requesting and receiving an abortion. This law would also restrict abortion after the first trimester.

Canada is the only democratic country in the world with no abortion law. While many western European countries have a 12-week gestational limit, abortion is legal at any gestational age here in Canada. Canada is way out of line with our international counterparts when it comes to protecting pre-born human rights. For example: 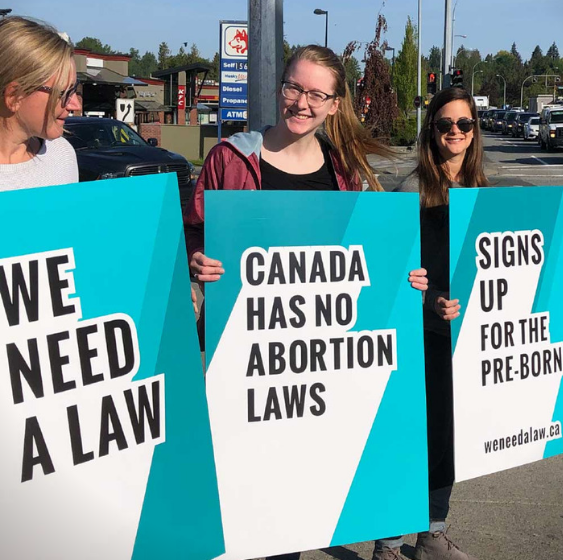 These countries are culturally and politically similar to Canada and they all recognize the need to protect the interests of pre-born children at some point. In Canada, however, where 100,000 abortions occur every year, up to 15% of abortions occur after the first trimester. As abortion clinics are not required to report statistics such as gestational age, it is difficult to know exactly how many babies are lost at each stage of pregnancy. The Canadian Institute of Health Information (CIHI) reports, however, that 12.7% of abortions occur at 13 weeks or later, and another 2.4% occur after 20 weeks, including when the baby would be viable outside the womb. This amounts to approximately 15,000 pre-born children per year, with up to 2,500 of those being aborted after 20 weeks, based on the Abortion Rights Coalition of Canada’s estimate of total abortions annually in Canada.

The majority of Canadians support some restrictions on abortion even if they identify with the “pro-choice” label. A 2020 DART poll found that just under half of Canadians believe that abortion should be illegal in the second trimester and that number jumps to 70% when it comes to the third trimester. This poll also showed that the majority of Canadians support a waiting period and are concerned with women getting support with 93% supporting a law requiring information about the risks of abortion and 78% supporting a law requiring doctors to inform patients about alternatives – both of which could be done through counselling.

In a 2010 study of Western European and North American abortion stats, it was clearly shown that counselling combined with a waiting period correlated with lower abortion rates. Canada, which has neither a waiting period or a counselling requirement, and no gestational limit, has an abortion rate of 241 babies aborted for every 1000 live births. Germany and Belgium, which have counseling, waiting periods, and a gestational limit, have a rate of 163 and 152 per 1000 respectively. This is considerably lower than Canada!

For more information on why we would fight for an International Standards Abortion Law targeting late-term abortions, as opposed to a full ban on abortion, please read our paper on why direction matters explaining why starting with protecting some is better than protecting none.

WATCH: Learn how to answer common questions about this law.

Click here to download a petition that you can use to collect signatures in support of an International Standards Abortion Law and send to your local MP!

See below for an example of an International Standards Abortion Law.

What the Americans are teaching us about abortion laws

Abortion absolutists are running out of arguments

We are only responsible for what we can achieve

"Safe and rare" is empty rhetoric without action

A failure to understand prudence